a neurotic young woman named Cameron who, when desperate for a job, winds up being unexpectedly thrust into Safe Haven, a fantastic world full of incredible beasts, unimaginable beings and zany characters. She receives a job as a guidance counselor at the Zoo-Phoenix Academy, where she faces head-on with a colorful cast of talking animals and strange creatures. Unfortunately, Cameron has quite the terrible case of zoophobia and is ultimately terrified by the very students and staff she must work with.

the story begins with a book opening satirizing Shrek's films after being opened it starts to tell the story of safe haven.in which he told the story of how a demon almost dominated paradise with his army of sinful monsters but who was defeated by a warrior with long golden hair(cameron).

the story is then cut and we see our protagonist cameron being played by viviane medrano (vivzie pop)in a dark forest that is something very symbolic and there it is being hunted by wild animals but as soon as it wakes up we realize that it was actually a dream and soon we see we see cameron in his room in his apartment.

she doesn't understand anything and tells him that she swore she saw a monster outside,but Alan says it must be just her imagination because she just woke up could even be part of a dream.

and then they convert and she says she is upset because last week they had a fight and he was rude to her,Alan says he wants to apologize and that's why he bought a gift when cameron sees that he bought her the frame she wanted she was very happy and apologized for the past fight,she then takes the picture of her father who was hiding in her bedroom drawer and put it in the frame.

Cameron says she loves Alan but lately he's eccentric and complicating everything and that's when she notices a red stone on his chest and asked where he got it from,but he deconverted and they change the subject.

and then after realizing she was late for her job interview she quickly grabs her things and gives alan a kiss and leaves,during the scene Cameron goes through several obstacles along the way while saying good morning to everyone.

While heading to the place where she will work,she is pursued by a rude, conniving, arrogant, greedy, hunter named victor serpent (also known as sir pentious), who eventually stands in her way. victor takes the phone from cameron, drops it into a mud puddle, and tells cameron to get herself out of reading and pay more attention to "more important things" like him. Just then, an explosion comes out from the basement of her cottage, prompting cameron to run to the building.

as soon as she arrives at the manager's office and goes through the interview cameron gets her job but what she didn't know is that the place where she would work would be in a pet store and when she sees all the animals from dogs and cats to birds and repeats she starts to freak out which ends up causing a huge mess in the store.

and after the damage she did in the store,let the animals run away and scare the customers she ended up being fired on her first day.the scene is then cut and we see cameron in a therapy assignment and her psychiatrist was dr. charlotte magne.

cameron then explains to his doctor that since her father died of wild animals while hunting deer when she was 4 years old her fear of animals started to become stronger and her nightmares seemed more real,then the doctor explains that she must always face her fears and for that she the recipe to travel to a place that is in the middle of a forest a city called safe haven.

even if cameron doesn't suspect anything she accepts after all she believes that spending the holidays can be good for your health after that she leaves the doctor's office and returns home.

but as soon as she gets home she realizes that her furniture is outside the building when she came in to see what’s happening mr lyle lipton the landlord he says cameron owed him 14 months rent which is why he had to expel cameron from his apartment to rent to someone who really pays.

later that night,cameron appears outside the building where she lived sitting on the sofa. so show up your boyfriend alan who was coming home from work on the radio campaign,after learning that cameron was expelled from his apartment he asks cameron to spend the night at his house.and cameron accepts it right away because it was starting to rain,so she gets in Alan's car and the two of them went to his house.

when they enter the cameron is kind of strange to see that alan had a collection of radios,and then Alan explains that he works at the radio company and he uses these radios to rehearse in his work and there are some that are just for decoration.

after that alan takes cameron to the guest room,but the room where she will stay had a collection full of deer dolls and she was even more horrified because it was this animal that caused the death of her father,but even though she is afraid she tries to build up courage and agrees to spend the night in her room just to please her host.

later when Cameron was sleeping strange things started to happen in the sky,from tremors to clouds swirling in the sky.Suddenly,victor serpent arrives at the ernerstor house, so he kidnaps her and whisks her off to a portal.

after fainting Cameron woke up scared because she found herself surrounded by animals,and for some reason the animals knew how to talk and walk like humans and out of nowhere they started to celebrate the arrival of cameron at safe haven

cameron believing it was a dream she bangs her head against a pole and repeating the words wake up three times,scared, cameron picks up a piece of wood that was lying on the ground to defend herself and she says that the safe heaven animals give her some answers.

when she asks what's going on here, what is this place and who are the animals she talks to and then Charlie the leader of the welcome committee replies that she is here to be our new resident.

but soon his game escape attempt was interrupted as much as was found by the zechariah,charlie and fabian.

after learning that cameron was not informed about safe heaven zechariah is going to have an apology with sir pentious and he tries to explain to the cheetah that he was just doing his job but the zechariah was so angry that he didn't listen.

meanwhile fabian and charlie go to zoo phoenix academy to present cameron his new work at safe heaven,even if refusing charlie tries to calm her down saying no to anything to be afraid of and then on the way to school zechariah starts telling cameron everything about safe heaven and why she is here.

The bewildered cameron learns the story of how the demons started a war between the angels to dispute the most powerful artifact in the entire universe where you can change the story and open portals to other dimensions just by writing on it the stolas book.

Cameron is very sad to learn that she will have to live in safe heaven forever and that she cannot speak to anyone from the outside world and neither alan ernesto nor anyone who knows she knows where cameron is,after that charlie took cameron to his new office where there was only a motivational poster of a cat stuck in a tree,in order to calm her down.

but Cameron is very scared and starts to cry begging zecharias for her to come home,but then Charlie tries to calm her down by saying that even though she’s eating she needs to face him right away and it made cameron remember her therapist’s words which made her stop crying.

after that Charles, Fabian and zacharias leave cameron in their new office and they will be back tomorrow to present her to some friends of charlie,while cameron was alone in her office crying for homesickness she hears a voice coming from inside a radio that was on her desk that she knows very well.

in the next morning cameron is accompanied by charlie to the school stage and when she gets there she meets teacher jackie and her husband alanzo,who were very anxious for the arrival of the new resident even though they seem to have met her before.

and then charlie introduces cameron to all his high school friends like vocalist kayla and her bully boyfriend rusty, unlucky drummer jack, playful guitarist spam and pianist gotica vanexa,who are very happy to finally meet a real human especially spam who kisses her on the mouth and rusty mocks saying "kneel down you have to pray".

after jack knows that cameron will be a new psychology he asks so he could have an appointment with her so he could talk about some of his problems and cameron accepted jack's request,but soon the conversation was interrupted when a spotlight ends up falling on jack's head by damian the brother chasula of charlie,who soon after gives a hell of a scolding him.

after that cameron asks charlie where he spends the night as she could stay for many years away from her house and the best charlie could give cameron was a room in her hazbin hotel,cameron not having much alternative she accepts to stay at the hotel with charlie.

the way to the hotel was very long so charlie and cameron had to take a shortcut through the forest to get there.cameron ends up getting lost from charlie and along the way she sees a baby bird (pretty similar to octavia) and begins to draw it in her sketchbook. However, the bird steals the book from her, and she chases him in an attempt to retrieve it. As she chases the bird, she is unaware that a shadow is following her quietly.

The bird finds his own picture and refuses to give it back. cameron finally manages to steal it back, making the baby bird cry. cameron turns around and sees the baby's angry bird family and they begin to chase her. As cameon runs, she is grabbed by zillion and swung up in the air.

One of the birds holds onto her foot, but she manages to kick it off, losing her shoe in the process. Finally, after falling through vines, cameron and zill finally land in a tree where the baby and another bird float down to them. zill speaks to them in bird talk and takes the picture from cameron and gives it to them, much to cameron's surprise.

zill is fascinated by cameron, as he has never seen human before. Tarzan tells her his name but it takes a bit for cameron to teach him her name. They then hear a calling in the distance,by Charlie, so cameron asks zill to take her to hazbin hotel. zill does so, repeating the calling thinking that's what Charlie is.

When they arrive at the hotel,angel dust and vaggie(the hotel's employees), who had been looking for cameron, arrive. cameron tells them about zill the unknown creature rescuing her from the birds. 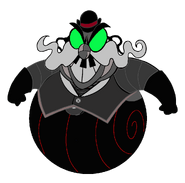 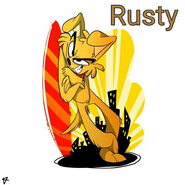 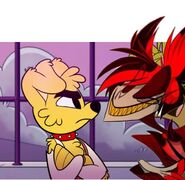 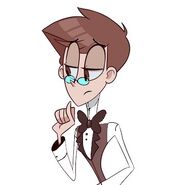 Retrieved from "https://ideas.fandom.com/wiki/Zoophobia_the_movie?oldid=2721603"
Community content is available under CC-BY-SA unless otherwise noted.