Zoey McMullen: A Tale of Two Zoeys is an adventure-platformer stealth video game based on the Disney XD television series Zoey McMullen. The game was developed by Behaviour Interactive and published by Disney Interactive Studios for the Nintendo DS, Wii and PlayStation 3 on November 23, 2010.

The player controls Zoey (or Chloe, depending on the objective of the level) as they move through places like the Queen's palace, the Dine or Whine restaurant, the streets of London, etc. Found in those areas are pennies that serve as points to add to the players score. The player can sprint by holding the Y button and jump by pressing the B button. The player can also attack by pressing the A button (though it only works in levels where attacking is needed) and tiptoe by holding the X button.

There are some enemies in some levels that serve as obstacles, and they will catch Zoey/Chloe if the player runs very fast. They will also catch them even if they tiptoe. To attack an enemy, the player must hide before the enemy looks, and if the player is very close to the enemy, they must act fast and attack.

One day, Zoey and her friends are taking vacation in London, England. After having lunch at a British restaurant called Dine or Whine, the gang then goes out to endulge in some activities. On the way, however, Zoey bumps into a British girl named Chloe McFarrell IX, who looks nearly identical to her with the differences being her red and green eyes swapped, her ponytail scrunchie being yellow instead of indigo, and an English accent in her voice to match her British nationality.

After getting to know each other, Zoey then allows her newly-found friend to tag along. When they get to Zoey's friends, Conrad, Jackie and Melissa get confused, nearly unable to tell the differences, but eventually stop mistaking Chloe for a clone of their human friend when she and Zoey show how different they are. Relieved, the friends then settle in the Queen's palace, where the Queen invites them over for tea.

Unfortunately, an evil man named Mr. John London invades the palace and abducts Zoey, thinking she is Chloe (his real intended target), wanting to make her into a lawn statue along with other lawn statues he made out of other children. When Chloe, Conrad, Jackie and Melissa hear of the kidnapping from the Queen, they set out to save her.

At London's bungalow, the evil man forces Zoey to pose for him and stay still, still mistaking her for Chloe. Getting a ray gun called the Human Freezer 3000, London aims it at Zoey and is about to blast her and turn her into a statue. But before he can do so, Zoey's friends and Chloe bust in and battle him. John tries to freeze them with his ray, but only succeeds in freezing Melissa, Jackie and Conrad. Chloe pursuades Zoey and they then attack London until he falls into the basement. Having snatched the Human Freezer 3000 before he fell, Chloe sets the knob to "reverse" and blasts Zoey's friends, unfreezing them. She also does the same to the children that John kidnapped and made into statues.

A day later, Mr. John London is arrested and sentenced to ten months in prison, while Zoey and her friends get ready to go back home to Theodore Street. Right as Zoey says goodbye to her British friend, Chloe gives her a souvenir: a Big Ben pin. 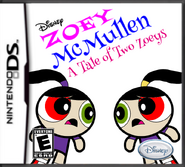 Wii cover art
Add a photo to this gallery
Retrieved from "https://ideas.fandom.com/wiki/Zoey_McMullen:_A_Tale_of_Two_Zoeys?oldid=1609232"
Community content is available under CC-BY-SA unless otherwise noted.