"Once I conquer and terraform the Earth, I will do the same to countless other planets and the entire universe will be mine."
―Zero

"No! Impossible! I can't be defeated by a human child! I am the King of the Solar Monsters! I am the Dark Titan of the Universe! I am Zero! Curse you Monster Kid!"
―Zero's last words as he is finally destroyed by Astrosaurus

In Monster Kid, he was the Bigger Bad of season 1, a major antagonist in season 2, 3 and 4 as well as the main antagonist of the final fifth season.

The firs time he fought Max was in Monster Kid: The Movie.

Zero is voiced by Corey Burton.

Zero resembles a bipedal black bird with antler-like extensions on his head with bat-like wings on each of his arms. He has red eyes with yellow pupils and red markings on his body. Zero uses large red hooks as hands and possess a red oval-shaped object implanted on his chest. 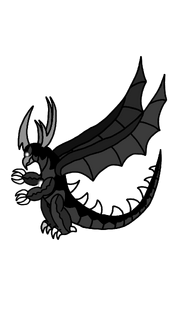 Zero's true form
Add a photo to this gallery

Zero is an evil creature who seeks to conquer the Earth and the entire universe with an army of extraterrestrial monsters. In order for him to terraform the Earth to his own liking, Zero would create monsters and send them to attack the humans, only to have his plans foiled by his arch-nemesis, Max Stewart, leading Zero to hold a deep grudge against the young boy. Zero is so pure evil as he enjoys causing destruction. Zero is so intelligent that he comes up with strategies to manipulate both heroes and villains, turning them against themselves. Zero would kill any other villain who failed to kill Max for him.

In his true form, Zero's roar is actually modified from the MUTOs.

1,000 years ago on Planet Star, Zero was created by the Ancient Ones with the purpose to bring balance to the universe until he betrays his own creators and killed many innocent lives on another planet and terraform it to his own liking, declaring himself as the "Dark Titan of the Universe". The Ancient Ones realized their mistake and banished Zero to the Solar Dimension, where he was able to create some advanced technology, giant monsters that feed on sunlight and sent his creatures to attack many worlds throughtout the galaxy as he terraforms one planet to another.

Zero arrived on Earth with the purpose to conquer and terraform the entire planet, unleashing an army of giant monsters and cause great destruction until he was defeated by the Star Empire, an ancient civilization and an alien race called the Blight. Zero was badly injured and retreated back into the Solar Dimension to heal.

Zero arrived on the planet, Photon with an army of Terradrons, but the Blight's military manage to defeat them, leaving Zero to battle King Blight.

The Origin of Monster Kid

Years after his last battle with Max, Zero's remains was discovered by Vulkox, who merges the remains with a living alien crystal, reviving Zero as they form an alliance.