Zatanna Zatara (or simply Zatanna) is a fictional character and superheroine appearing in DC Comics.

Zatanna is both a stage magician and an actual magician, like her father Giovanni "John" Zatara. As such she has many of her father's powers relating to magic, typically controlled by speaking the words of her incantations spelled backwards.

She is known for her involvement with the Justice League, her retconned childhood association with Batman, and her crossing of the Vertigo line with characters such as romantic partner John Constantine. 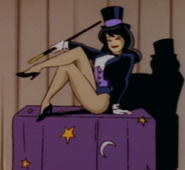 Zatanna as she appears in the DC Animated Movie Universe

Concept of Zatanna as the Dragon Witch in Justice League Dark: Mortal Kombat and DC: Unlimited Rebirth
Add a photo to this gallery
Retrieved from "https://ideas.fandom.com/wiki/Zatanna?oldid=2693069"
Community content is available under CC-BY-SA unless otherwise noted.