Wonder Woman is a fictional superheroine appearing in American comic books published by DC Comics. The character is a founding member of the Justice League. The character first appeared in All Star Comics #8 in October 1941 with her first feature in Sensation Comics #1 in January 1942. The Wonder Woman title has been published by DC Comics almost continuously except for a brief hiatus in 1986. In her homeland, the island nation of Themyscira, her official title is Princess Diana of Themyscira. When blending into the society outside of her homeland, she sometimes adopts her civilian identity Diana Prince.

Wonder Woman was created by the American psychologist and writer William Moulton Marston (pen name: Charles Moulton), and artist Harry G. Peter. Marston's wife, Elizabeth, and their life partner, Olive Byrne, are credited as being his inspiration for the character's appearance. Marston's comics featured his ideas on DISC theory, and the character drew a great deal of inspiration from early feminists, and especially from birth control pioneer Margaret Sanger; in particular, her piece "Woman and the New Race".

Wonder Woman's Bronze Age origin story relates that she was sculpted from clay by her mother Queen Hippolyta and was given a life to live, from Zeus, as an Amazon, along with superhuman powers as gifts by the Greek gods. In recent years, DC changed her background with the retcon that she is the daughter of Zeus and Hippolyta, jointly raised by her mother and her aunts Antiope and Menalippe. The character has changed in depiction over the decades, including briefly losing her powers entirely in the late 1960s; by the 1980s, artist George Perez gave her an athletic look and emphasized her Amazonian heritage. She possesses an arsenal of magical items, including the Lasso of Truth, a pair of indestructible bracelets, a tiara which serves as a projectile, and, in older stories, a range of devices based on Amazon technology.

Wonder Woman's character was created during World War II; the character in the story was initially depicted fighting Axis military forces as well as an assortment of colorful supervillains, although over time her stories came to place greater emphasis on characters, deities, and monsters from Greek mythology. Many stories depicted Wonder Woman rescuing herself from bondage, which defeated the "damsels in distress" trope that was common in comics during the 1940s. In the decades since her debut, Wonder Woman has gained a cast of enemies bent on eliminating the Amazon, including classic villains such as Ares, Cheetah, Doctor Poison, Circe, Doctor Psycho, and Giganta, along with more recent adversaries such as Veronica Cale and the First Born. Wonder Woman has also regularly appeared in comic books featuring the superhero teams Justice Society (from 1941) and Justice League (from 1960), along with Superman and Batman.

The character is an iconic figure in popular culture that has been adapted to various media. October 21 is Wonder Woman Day, commemorating the release of her first appearance in All Star Comics #8 (with the exception of 2017 which held the day on June 3 to tie in with the release of the film of the same name).

Wonder Woman has been featured in various media from radio to television and film, and appears in merchandise sold around the world, such as apparel, toys, dolls, jewelry, and video games. Shannon Farnon, Susan Eisenberg, Maggie Q, Lucy Lawless, Keri Russell, Rosario Dawson, Cobie Smulders, and Stana Katic among others, have provided the character's voice for animated adaptations. Wonder Woman has been depicted in both film and television by Cathy Lee Crosby, Lynda Carter, and in the DC Extended Universe films by Gal Gadot.

Wonder Woman posses a different ability from a select few of the Greek gods and goddesses. Originally, Wonder Woman used an invisible plane that responded to her voice and only one of Amazon descent could see, but she was later gifted with flight. Her patron goddess is Hera, queen of Olympus, goddess of marriage and wife to Zeus, who freed the Amazons from the clutches of the war god, Ares, and gave them a home on an unplottable Paradise Island. Her blessing from the gods give her the physicality far above Superman and Captain Marvel/Shazam. 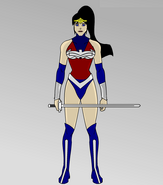 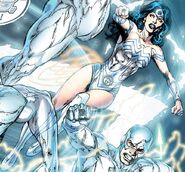 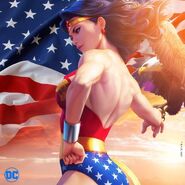 Add a photo to this gallery
Retrieved from "https://ideas.fandom.com/wiki/Wonder_Woman?oldid=2712895"
Community content is available under CC-BY-SA unless otherwise noted.