War of the Monsters is a beat em' up 3D fighting game for the PlayStation 5, Nintendo Switch and Xbox One developed by Airship Syndicate in collaboration with LightBox Interactive and Insomniac Games and published by Sony Interactive Entertainment. It is a reboot of the PS2 game that was released in 2003 and reconstructs the story on a cinematic perspective compared to the original.

The developers wanted to reintroduce longtime monster fans, as well as new players to this amazing game.

Like the original, the game is set in an aftermath of an alien invasion of Earth where their hazardous fuels have spawned giant monsters that battle one another in citywide environments. The game pays homage to kaiju films and science fiction films past, present and future.

The earth is under attack by alien invaders, as many ships attacking major cities around the world . The military attempt to repel with conventional weaponry, but were ineffective against the saucers advanced deflector shields. The President, world leaders and representatives gathered at the United Nations to discuss how to defeat the invaders. The joint chiefs suggested to launch a nuclear counterstrike but that would kill them too.

A renowned scientist, Dr. Cedric Beaumont came before them with a sign of hope; a recovered one piece of the saucers that the tanks manage to break off. This inspired the masses to develop a super weapon to end the invasion and the president and joint chiefs agreed to follow along with his plan. Dr. Beaumont along with many leading scientists and engineers work together in hidden laboratories around the world created a series of state-of-art pulse generators in a proximate 2 years while the us army held off the aliens to buy them enough time. 200 were built and are then placed upon key famous landmarks around the world. Activated in unison, the generators emitted a massive wave of EMP that crippled the saucers and caused them to crash to the surface. It would seem humanity has defeated the invaders thus ended the invasion with billions have mourned for their losses and some rejoiced and celebrating their victory in relief. Unbeknownst to them, the downed ships were leaking glowing green ooze into streams, gutters, and oceans and contaminated the air with toxic vapors...

Weeks later, Dr. Beaumont and other scientists had discovered that the alien's fuel for their ship is a highly radioactive mutagen that increases the size and mass of the molecular structure at an accelerated rate. The radioactive fuel triggered unseen mutations as it comes into contact with human, animal and plant life, giving birth to giant monsters! While ancient kaiju that had once roamed the earth for many eons ago have awakened. Enraged by the radiation, these gigantic beasts had rampaging across the planet attacking every major city. The United Nations had created a global military organization, the Global Defense Alliance. Both GDA and Military salvaged any downed, intact ship they could find and extract the mutagen so that scientists could research and study it's composition. Dr. Cedric Beaumont and his team had reverse engineered the mutagen's radioactive properties, changed its color from green to blue and naming it the Alpha-Serum.

The GDA Initially intended the air-based form of the serum to end the monster scourge but it changed and calmed them from destructive, aggressive and hostile, to gentle, benevolent and instinctively protective while other mutants were immune to the effects so the government had other plans for its use. With more monsters appearing, the GDA had plans to create titans of their own, giant advanced battle mechs that were infused with the serum as limitless power source. Seconds after activation, the mechas have gained sentience with the Alpha Serum increasing their artificial intelligence and took on their lives and existence of defending humanity. Other heroes began to rise to the challenge to save the world. Unbeknownst to human and monster alike... the alien invaders, the Zorgulon Enpire have returned! The War of the Monsters had begun!..

There are over 50 playable monsters at the start; 15 that are available from the start, 35 to unlock. Unlike the original game, many of these characters will have environmental strengths and weaknesses.

These monsters can be unlocked in two methods; use battle tokens to purchase them with at the shop or in the Story Mode campaign.

The reboot of War of the Monsters feature a vast veriaty of characters crucial to the cinematic story campaign.

There are 28 maps. Each have Large and Extra-Large. They can now be changed from day to night and most stages will show off environmental and weather effects such as moving clouds. Striking Buildings will cause them to shake, shatter windows, and reveal structural integrity.

Each Monster have five alternate cosmetic skins. Initially you will only have access to skins 1 and 2, which are palette swaps . While on the other hand, three, four and five will substantial changes such as different roars, sound effects and attack colors..

Mimic Monsters will only have 3 skins. Note*, Alpha Man and Godiva only have 2 free alternate costumes.

In the War of the Monsters cinematic Story Mode, many monsters have divided into groups that have different goals ands styles of play and what they consider friend or foe

Formed by Gigazaur, the faction's sole purpose is to protecting the Earth from outside invading forces or from more malicious mutant monsters who seek to disrupt the balance of the planet and promote peace and coexistence between Human and Kaiju.

A global scientific and military organization formed by the United Nations in wake of the War of the Monster. The GDA has built many mechs to repel monster attacks and assist the Kaiju Guardians.

monsters that are not aligned with any of the five factions.

After the supposed defeat of Cerebulon, more of the advance ship's mutagenic fuel has

War of the Monsters retains most of the previous elements of the original PlayStation 2 title such as the players take the roles of large monsters in city environments and players are allowed to roam freely within the city area, which allows climbing of jumping from buildings and cliffs. The game plays as a fighting game yet works differently than the traditional online multiplayer one-on-one structured rounds. Instead, stages can include up to 10 players in a ten way fighting structure. The camera retains third-person perspective. It reboot also features many of the updated textures, visual effects, enhanced high definition graphics and performance improvements.

Monsters now have a status HUD on the lower left corner of the screen and features three gauge bars; health, rage and stamina. Like the standard fighting game formula, every time a monster takes damage, their overall Health bar drops until it is completely depleted, resulting in player defeat.

When the player picks up another monster, he can throw through buildings to see the inner structure of the buildings. There are objects and weapons in the game such as cars, plane, boats, trucks, Radio tower, gas tanks, debris, tanks can be found in any level split in 3 groups: Club, Spear, and throwable items. They're Weapons may be used to do extra damage to enemies, spears (Radio towers, broken pipe or bars) can stun enemies, but once they get it out they will throw it back at you. Clubs (Steel Beams, parts on buildings) can be used to do more damage from hitting other monsters, and can be thrown. Some may have a special effect, such as exploding and catching a monster on fire or a generator that can be used to shock a monster. Large throwable items like cruise ships, boulders and small buildings can be found on the map. Aircraft carriers will also be featured on aquatic areas as platforms or throwable weapons.

Monster have they're combos and special abilities and have new tricks while an opponent's in the air, the player can grab it and throws it towards the ground. And in most stages, they have hazardous areas like very tall buildings, deep water which, some monsters have the ability to swim in underwater areas. Rang attacks are now used with R1 button wile the Square button performs light melee attacks.

Similar to the Echo Fighters of Super Smash Bros. Ultimate, They are describe characters who are considered an almost complete clone of another character. sharing essentially all of the main attributes of the original character (such as speed, jumps, strength and weight), In addition, Mandrilla, ?, Vectus Maximus and Zetius are Mimic Monsters of Gigazaur, Alpha Man, Congar, Magmo, Colossus. And Mimic Monsters only have three alternative skins. Though they have similar animations, but their taunts, colored attacks and move sets are entirely different.

All of these actions are possible while holding an object. Many of these functions spill over into the other objects as well.

Club weapons follow the same format as the punches, including stun hits, shoves, uppercuts, etc... They vary in that they inflict more damage and have more range

Spear weapons feature all of the normal object and club functions with a modification on what occurs when thrown. They are radio towers, broken pipes and bars.

The reboot of War of the Monsters is developed by LightBox Interactive, Airship Syndicate and Insomniac Games. Though War of the Monsters is both a remake and reboot of the original PS2 video game, the team had both updated and enhanced the original characters models and reconstructed the cutscenes. The character designs and artwork were updated and provided by Patrick Brown.

Some monsters will retain their original elements of their physical appearance, for example; Congar will retain his bald patches on his body from the original game. Agamo and Preytor remain the same with few adjustments to their designs. Magmo will now have glowing eyes and veins around his body due to his volcanic nature.

The game will take advantage of the PlayStation Dualsense Controller.

A single or multiplayer player cinematic campaign that features a unique adventurous storyline and emphasize character development. The mode features a world map and a team system for the characters, with a limited choice of two characters in the beginning of the campaign. As the progesses

Each campaign level gives the player a choice of four characters or solo. The campaign can be played in single-player or cooperatively via online multiplayer and players and enter or leave any time.

These are the nine bosses that will be encountered the War of the Monsters main story mode narrative.

This menu allows players to shop and spend points they have earned in the other game modes to purchase and unlocking new playable monsters, skins and arenas for Adventure and Versus Mode, gallery items, character models, stills and concept art.

Original and the Reboot

In War of the Monsters, everything that was present from the original PS2 game has be remade from the ground-up in high definition textures and graphics, providing new sound effects, animations, and a new experience for longtime fans.

The monsters of the game have gone under a design overhaul to their character models and designs. 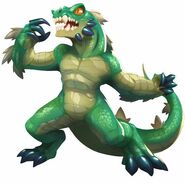 Gigazaur
Add a photo to this gallery

Retrieved from "https://ideas.fandom.com/wiki/War_of_the_Monsters_(2020s)?oldid=2724032"
Community content is available under CC-BY-SA unless otherwise noted.