WB Kids, short for Warner Bros. Kids, is both an American Saturday morning children's television block and basic cable and satellite channel, with the block version airing on The CW, having premiered on July 27th, 2019, replacing One Magnificent Morning, and the channel version four months after the block premiered. The block and channel serve as a revival of Kids' WB, airing mainly programming from Warner Bros. Animation, Hanna-Barbera, DC Comics and Cartoon Network, also airing select content from other companies.

In May 2018, Litton Entertainment had confirmed that they'll end all of the blocks due to their low ratings and several messages complaining about the lack of Saturday Morning blocks, moving its programming to knowledge-themed networks on cable television. Later, after the confirmation, The CW wanted to come up with a new Saturday morning programming block aimed for children.

In June 2018, WarnerMedia teamed up with select companies to launch a new block for the channel. After several discussions, the channel announced the intent to relaunch the now-defunct Kids' WB, being this time named WB Kids, named after the website. Immediately, WB Kids was announced and born. A day before New Year's Day, The CW placed its first look in its Facebook account.

On March 2019, the first promo for the block aired on TV and was posted on YouTube with thousands and thousands of likes, mostly where the most-beloved Kids' WB block is being revived with a different name. The next month, both Warner Bros. Animation and Cartoon Network Studios had plans to create original series for the block. Thereby, (although first aired on Cartoon Network), The Chronicles of Collin the Speedy Boy was officially labeled as the first WB Kids original series. In addition, other companies including studios outside of U.S. would also produce original series for WB Kids while also creating it for their own countries.

On June of the same year, a month before the block premiere, the full starting lineup for the block was confirmed. The next month, the block finally premiered.

Launch of the block

The block was launched on The CW on Saturday, July 27th, 2019, replacing One Magnificent Morning after five years of existence. The first program to air was the 1951 Looney Tunes short Rabbit Fire as part of the Acme Hour block.

The block not only was given largely favorable reviews from critics and viewers, but was also proven to be successful on the launch day, being viewed by both kids and adults.

Launch of the channel

Due to positive reviews, successful views and heavy fan demand, WB Kids was confirmed to get its own 24/7 hr. channel operated by Warner Bros. as a sister channel to Cartoon Network and Boomerang by November 2nd, 2019.

The launch sequence was inspired by The WB's (one of The CW's predecessors) launch sequence, with Bugs Bunny and Daffy Duck (both voiced by Jeff Bergman) discussing about who will launch the channel. The camera then pans over to an animated version of Madison McDougal-Hamilton (voiced by herself) drawing Ollie and Wendy in a notepad, coming thereafter to life, launching the channel.

Much like WB Kids Magazine, the channel has two mascots: a skater boy named Ollie (voiced by Yuri Lowenthal) and a beautiful genie named Wendy (voiced by Liliana Mumy), both being created by Madison McDougal-Hamilton. They primarily announce the upcoming cartoons, host the blocks and host special events as well.

When asked if there's something going on between them, Madison replied that they are indeed dating.

The United Kingdom version of the channel was launched on April 2020, replacing Boomerang +1. The channel is owned by Turner Broadcasting System Europe.

A Latin American version of the channel was launched in January 2020, replacing Tooncast. Besides that, it is also featured as a block on Imagen Televisión in Mexico, Chilevisión in Chile and El Trece in Argentina.

The Korean version version of the channel premiered on March 2020, and has the Korean translation in the bottom of the normal WB Kids logo. At this time, it is currently unknown if it will have the WB Kids block or not.

The Japanese version of WB Kids has premiered on May 2020.

And for the channel version of the schedule, click here: WB Kids/Channel Schedule.

Note that most of the shows are rated TV-Y7 (and TV-Y7-FV), but there are a few shows that are rated TV-PG (select Cartoon Network shows and films only).

The CW variant (December 2019-present).
Add a photo to this gallery 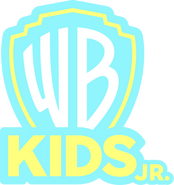 WB Kids Jr.
Add a photo to this gallery

Retrieved from "https://ideas.fandom.com/wiki/WB_Kids?oldid=2637637"
Community content is available under CC-BY-SA unless otherwise noted.