Velocity: The Dark Human Slayer is an American animated dark fantasy series created by Bryan Andrews with Rob Renzetti co-creating that premiered on Nickelodeon on November 5, 1999 and ended on March 7, 2003, being produced by Nickelodeon Animation Studios and MTV Production Development (Season 5 only).

On 2017, it was announced that the series will be getting a new short season that will last for 11 episodes, making it a mini-series for MTV. The first six episodes started on March 23, 2018 with the last five episodes originally aimed for its June date, but went ahead and got released on May 31, 2018 instead.

This series has spawned a franchise: Velocity: The Dark Human Slayer (franchise), with tons of games being made and a prequel, titled The Human Race, being set to be released in 2020.

40 years has passed, and a now aging Velocity now has lost his sword to TBD. Now, he must find a way to stop Brimstone without the Extinciton.

American rapper Snoop Dogg has made a song titled Velocity, which is the theme song for the series.

In October 2003, 7 months after the series ended, Nickelodeon Movies and Paramount Pictures had plans for a film adaptation based on the series. The movie was intended to be as a series finale to the show and was going to be released in 2007, but due to unexplained difficulties, troubles and money losses, the project was cancelled. However, in 2005, before the cancellation, Nickelodeon Movies created the project reel.

However, Ronzetti posted his late plans for a Velocity movie. The movie was to be titled Velocity: The Dawn of the Dark Humans and was to serve as a proper series finale. The animation would have been produced at Digital eMation in Korea, rather than Rough Draft Korea.

Even though the film in 2007 got cancelled due to unexplained difficulties, in 2019, a year after the revival season got out, they released a live-action film based on Velocity The Dark Human Slayer. The movie received mixed reviews from critics, but positive reviews from audiences, fans and other people, becoming a box-office hit.

Velocity has appeared in some Nickelodeon-branded shirts.

The series recieved "universal acclaim" from critics, viewers and fans alike. The rating on Rotten Tomatoes has "100%" Fresh certificate, with the critical consensus reading: (reserved for Green). The Metacritic has a score of 98 of 100, indicating "universal acclaim". 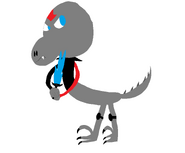 Velocity in the supposed art style

On June 2017, MTV confirmed that Velocity: The Dark Human Slayer will be returning as a 11-episode mini-series. The revival shared the same animation as its first 4 seasons, but more enchanced. In contrast to its' first four seasons, the fifth season is more mature, gaining a TV-14-V rating.

Retrieved from "https://ideas.fandom.com/wiki/Velocity:_The_Dark_Human_Slayer?oldid=2452730"
Community content is available under CC-BY-SA unless otherwise noted.