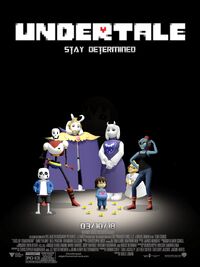 Undertale (or simply known as Undertale: The Movie) is a 2018 fantasy adventure computer-animated film that is based on the 2015 critically acclaimed role-play video game of the same name by Toby Fox. It is produced by DreamWorks Pictures and distributed by Universal Pictures and 20th Century Fox.

[When the synopsis is done development]

Years ago, two races ruled over the Earth as equals: human and monster. One day, a war broke out between them and, after a long series of battles, the humans were victorious. The humans sealed the monsters to the Underground with a magic spell, while the humans took control of the surface. However, the barrier is not a perfect seal, and the only point of entrance to the Underground is Mount Ebott...

15 years later, when a child named Frisk decided to climb Mount Ebott, and decided to explore, the genderless child accidentally fell into a hole into the underground where the monsters lived...

Retrieved from "https://ideas.fandom.com/wiki/Undertale_(Dreamworks_Film)?oldid=2157176"
Community content is available under CC-BY-SA unless otherwise noted.