The Ballad of Tobio
by Osamu Tezuka

R for Language and Boxing Violence

the film itself was loosely based on Osamu Tezuka's manga, "The Ballad of Tobio"

The year is 1965, 15-year old Toby Katsumoto (Joey Miyashima) is an escapee from an Orphanage, who decides to live in the slums of New York, he then becomes a new recruit for Rob's Gym as a boxer

Andy shopped the script to many studios that ultimately passed on, first was American International Pictures, then to AVCO Embassy Pictures, until one executive recommended founder Joseph E. Levine whom had recently left the studio to pursue Independent Producing, Andy met Levine, showed him the script and he loved it, soon United Artists (who prior released Andy's Home Invader) agreed to release it.

Production started and ended in November 1973, Miyashima and Fisher were in their Teens at the time, Fisher hadn't become a star yet at this point.

Despite the short production, the movie didn't come out until March of 1975, by this point Hal Ashby's Shampoo was released a month prior with Carrie Fisher in the cast.

Toby received mixed to positive reviews during it's release, The film apparently has an 77% "Certified Fresh" rating on Rotten Tomatoes and a 51/100 on Metacritic, however at the time of release, Toby was called a typical clichéd Boxing drama of the 70's. until it was later perfected by Rocky the following year

After the film's release, a sequel based on the last half of the Manga was considered by UA, however Andy wasn't interested in the idea of a sequel, alongside Carrie Fisher now being an overnight star thanks to Star Wars in 1977, the actors growing older and Andy taking the rights to Paramount, killed chances of a sequel. 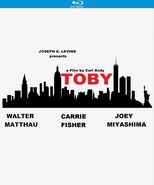 Kino Lorber Blu-ray cover
Add a photo to this gallery
Retrieved from "https://ideas.fandom.com/wiki/Toby_(1975_Film)?oldid=2469398"
Community content is available under CC-BY-SA unless otherwise noted.