Thomas is a blue tank engine who is #1 on the Sodor Railway, and the main character.

He plays Casey Junior Played in Sonic and Tails (AKA Dumbo), Lumpy a.k.a Dumbo, Ana (Dumbo) and Peugy (Dumbo)

He is a Circus Train

He plays The Magic Carpet in Jacob Samraladdin and More!

He is a Flying Carpet

He is an old man

He plays Tito in Larry and Company

He is a bot fighter

He plays Bernard in The Rescuers (Hiatt Grey Style)

He is a Mouse.

He plays with Mike in Characters University

He is a Green Monster

He palys Tito in Larry and Company

He plays Quill in Soar (Disney and Sega Style)

he is a monkey

He is a spotty Puppy

He is a Gnome

He plays Jiminy Cricket in Mickeynocchio

He is a cricket

He plays Ariel in The Little Tank Engine

He is a mermaid

He is a limbless hero

He plays Benny in The Toon Movie (TongueSpeakingFool Style)

He plays Pac-Man in Thomas and the Ghostly Adventures

He is a hungry engine

He plays Inky in Jack and the Ghostly Adventures

He is a ghost

He plays The Magic Mirror in Brian (Shrek)

He Plays Simba In The Lion King

He Is A Lion

He Plays Bill the Lizard in Zelda In Wonderland

He is a lizard

He is a parrot.

Goal: To be a really useful engine

Likes: Being a Really Useful Engine, being the Fat Controller’s No. 1 engine, being nice to his friends, Annie and Clarabel, his friends, Ashima, people and engines who are friendly to him, Rosie, working on his branch line, racing, playing tricks on the other engines, blaming engines and people (sometimes), shunting trucks, Spencer being nice to him and his friends, saying that it's not his fault (always), being happy, being angry (sometimes), being rude to engines and people (sometimes).

Dislikes: Causing confusion and delay, being late, Diesel 10, people and engines who are mean to him, Devious Diesel, his snowplough (sometimes), danger, not working on his branch line, being banished from his branch line, Rosie annoying him, Billy calling him a bossy engine, other engines pulling Annie and Clarabel (sometimes), Sailor John, Vinnie, anyone furious at him, Cranky being cranky, Spencer being rude to him and his friends. 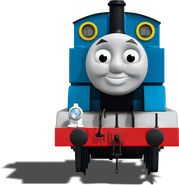 Front view of Thomas
Add a photo to this gallery
Retrieved from "https://ideas.fandom.com/wiki/Thomas_the_Tank_Engine?oldid=1616237"
Community content is available under CC-BY-SA unless otherwise noted.