The Tip of the Iceberg! is a Afterlife-themed 3D CGI Computer-animated Pokemon-inspired Fantasy-adventure movie.

Joe the Napoleon's rival dies and becomes a Mudkip, only chances to save the Afterlife (looks like Sydney at Night) populated by Pokemons - he must they must held a Biggest World Cup Auto Race in Arctic Circle-like snowy land. 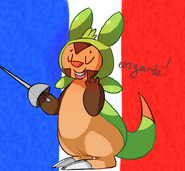 Retrieved from "https://ideas.fandom.com/wiki/The_Tip_of_the_Iceberg!?oldid=199758"
Community content is available under CC-BY-SA unless otherwise noted.