Start a Wiki
The Smurfs 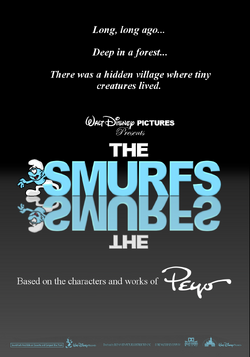 The Smurfs is a 1995 traditionally-animated musical/comedy/adventure film based on the comic strip of the same name by Pierre "Peyo" Culliford. It is written by Peyo's son, Thierry Culliford, along with Doug Langdale, John Behnke, Rob Humphrey and Jim Peterson and directed by Smurfs comic book artist, Alain Maury. The film is produced by Studio Peyo, in association with Walt Disney Feature Animation. The film was released to theatres on May 12, 1995.

Sir Johan and Peewit, the brave knight and royal court jester of the kingdom, help Papa Smurf and the other Smurfs rescue Smurfette from the evil wizard Gargamel and his pet cat Azrael. Smurfette had a dream about where she came from and tells us the reasons of how Smurfette was created to cause chaos before Papa Smurf found her inner beauty and made her a real Smurf with the use of his magic.

The Smurfs cartoon series produced by Hanna-Barbera Productions was cancelled by NBC after its ninth season, due to its time-travel plotline and continuity. The studio ceased any future projects of The Smurfs (with the notable exceptions of Cartoon All-Stars To The Rescue and their final television special with the little blue creatures) and that was the end of it. Peyo decided to make a sequel to the previous animated feature film which he had worked on 14 years ago, The Smurfs and the Magic Flute.

On February of 1990, Peyo pitched his new The Smurfs film to Disney with a plot outline and the film was eventually approved in the beginning of summer 1990. He was working on a film entitled The Smurfs and the Magic Flute II, which was supposed to be a sequel and continuity to the original 1976 film co-produced with Belvision Studios. The script took a long time, as well as storyboards drawn by the creator himself.

There could have been scenes where Johan and Peewit meet Smurfette and another where the magic flute is going to be taken by the evil wizard, Gargamel. According to Leonard Maltin, the script, storyboards, animatics and pencil tests of the planned sequel have survived. Pencil tests were done by Milt Kahl, Glen Keane, Jamie Oliff and Ian Freedman. There was going to be new songs too, such as Meet Smurfette and The Magic Flute Will Be Mine. However, these songs didn't make the cut and were later put into the one-hour television special.

The movie would've had diamonds with the Smurfs' blue essence in it, but it was removed, fearing that it might give Japanese audiences eye problems and seizures. While working on the film, Peyo saw the box-office failure of the 1987 animated feature The Chipmunk Adventure. He then decided to cancel production of the film by September 1990, after he had completed the script, storyboards, and animatics. Peyo then broke ties with Disney, took all of his stuff with him which contained the planned sequel and instead made it into a one-hour television special produced by PBS Animation (with co-production from Hanna-Barbera Productions and Lafig S.A.). Voice recording sessions began on November 1990 and finished in January of 1991. Production on the animation for the special began around February 1991 and finished in October 1992. During those months, retakes, music scoring, and sound design were being completed. Once the animation is finished, it is sent back to the United States where it is reviewed; the staff look for mistakes in the animation or "things that didn't animate the way [the staff] intended". These problems are then fixed back in Taiwan (including the Phillipines) and the special is finished, through its exact date November 2, 1992. Post-production was completed in November 13, 1992 (two days before its premiere on ABC, prior to Peyo's death).

But after Peyo's death in Christmas Eve 1992, his son Thierry Culliford decided to do a film where we learn about Smurfette's origins and Gargamel kidnapping her. Sir Johan and Peewit were called in to help The Smurfs rescue Smurfette from Gargamel and stop him before he tries to take The Smurfs' blue essence and become the most powerful wizard in the world.

Thierry have written a new script with writers Doug Langdale, John Behnke, Rob Humphrey and Jim Peterson. The new script was pitched to Disney and was accepted for production. Artists at Disney spent months storyboarding and re-storyboarding the entire movie. They didn't stay with the script form for too long. Some scenes were being cut from the movie due to its risque content and is considered taboo. There was also going to be a scene where Peewit dances like Michael Jackson, but Thierry had convinced them to cut out that scene mainly due to him holding the content control of the movie.

Originally, Frank Welker was intended to reprise his role as Peewit for the film. But the casting director turned him down, feeling that the voice was not right for the character. She instead chose then-newcomer Billy West, who was working on Ren and Stimpy, to voice the character. Welker instead, chose to play Gargamel's cat Azrael for the film.

Don Messick was replaced by Jack Angel as Papa Smurf and Lucille Bliss was replaced by Kristen Chenoweth as the voice of Smurfette. Danny Goldman, however, reprised his role as Brainy Smurf for the film. Paul Winchell was too busy playing Tigger at the time for future Winnie The Pooh projects, so Hank Azaria was chosen to play Gargamel for the first time, pre-dating the live-action/CGI duology films from the early 2010s.

Production began on the animation in late June 1993. Despite the budget constrains, the Disney animators were able to work through it without having to resort to the style of limited animation like H-B did on their cartoon series. The animation took 26 to 34 months, no matter how bad the animation had suffered through all those months. During these months, music and sound design were completed.

Doug Langdale, along with the writing trio John Behnke, Rob Humphrey and Jim Peterson wrote the entire script for the movie with Peyo's son, Thierry Culliford as script supervisor and story editor. He was involved in the making of the movie to make sure it was more faithful to his father's work on the original comics.

Production on the animation took 26 to 34 months. Some animators, who worked on The Smurfs cartoon for Hanna-Barbera Productions, left to work on the movie as well but with the animation more fluid and lifelike than the standard of Saturday morning cartoons during the 80s.

The original music scores were composed by Mark Watters, influenced mostly by Belvision Studios' The Smurfs and The Magic Flute and Disney's very own Snow White and the Seven Dwarfs.

The Smurfs received positive-to-mixed reviews from critics. The film was praised for its wonderful storyline and animation, as well as staying a little more true to the original comics than the Hanna-Barbera cartoon itself. The film's success even led to a new TV series produced by Walt Disney Television Animation, in association with Lafig S.A. and Studio Peyo.

Retrieved from "https://ideas.fandom.com/wiki/The_Smurfs_(1995_film)?oldid=633426"
Community content is available under CC-BY-SA unless otherwise noted.