The Rowdyruff Boys  are the male but wicked counterparts of The Powerpuff Girls, created by Mojo Jojo. They were made by flushing armpit hair, snails from the cafeteria, and the tail of the talking dog down the jail cell toilet (snips, n' snails, n' puppy-dog tails). They have very similar abilities to the Powerpuff Girls, but they all possessed very easily targeted weaknesses, although these have been corrected by Him later in the series.

Blossom's equal equivalent. Brick is the abrasive, short-tempered and aggressive leader of the group. He once shared Blossom's triangular part and bangs, but after reincarnation, his bangs are no longer seen under his cap and he now has a spiky mullet. He is mean, arrogant, and abusive mainly toward Boomer. He wears a backwards red baseball cap compared to Blossom's bow.

In his first appearance he got along with his brothers better than he currently does and was also less bossy, overbearing, and vain than he is now. Brick is always yelling at his brothers and thinks he is the coolest out of them as well. He also decides what they will do and has the final say on it as well. His element is a puppy dog tail and his signature color is red. In the anime he uses a crazy straw and spitballs to battle the Powerpuff Girls. He despises anything girly and cute, such as puppies, dolls, kittens, etc. In Powerpuff Girls Z, he uses a bendy straw to battle the Powerpuff Girls Z.

Bubbles's equal equivalent. Boomer is the loud-mouthed dimwit of the trio, as opposed to Bubbles' naive sweetness. He is constantly picked on by his brothers, partially because of him being extremely naive (and also, in an extent for his stupidity). In the episode The Boys are Back in Town, Bubbles claimed that Boomer is cute (her sisters told her she's weird after that). Once, his hair was in a neat, curved fashion similar to Bubbles' ponytails. After he was reincarnated, his hair is much longer and spikier on each end (in a wings haircut). One difference between him and Bubbles is that she is very easily grossed out by most of the icky stuff he and his brothers would always delight in doing. His special power is his ability to create a baseball bat out of raw energy, as shown in The Boys are Back in Town. It is also revealed in the episode Bubble Boy that Boomer, (Bubbles in disguise) is the best spitter of the trio. Even though Brick and Butch are in disbelief of the fact that Boomer is their brother, there is no doubt they regard him as important. Boomer is always included in their acts of violence and/or criminal acts. His brothers even show concern when they think he goes missing when they break into the Powerpuff Girls' house. Despite being a villain Boomer is (like Bubbles) the most polite of his group. In The Boys are Back in Town, he is seen to be easily distracted (in this case by a passing fly, which he stopped to play with). Boomer's element is snips and his signature color is blue. In Powerpuff Girls Z, he uses Q-tips to battle the PowerPuff Girls Z.

Buttercup's equivalent. Butch is the hyperactive, violent, borderline psychotic of the group, exceeding Buttercup in both bloodlust and rage. While all three boys love to wreak havoc, Butch enjoys it the most. He appears quite hyperactive and has a tendency to twitch. He gets particularly excited usually when Brick calls out a game to play during fights. He shares Buttercup's small triangular part and once had a small cowlick on top of his head in place of Buttercup's flip. After his reincarnation, all of his hair is spiked upwards. One difference between him and Buttercup is that he has no conscience whatsoever, whereas, she would almost always apologize for her mistakes. His special power is that he can generate an energy shield (or energy field) to protect him from energy blasts. He goes crazy when someone (mainly Brick) announces a fight. Butch's element is snails, and his signature color is green. In the anime, he uses dirty socks to battle the Powerpuff Girls.

When they were first introduced, the personality of the Rowdyruff Boys were very similar, as their only goal was to defeat the Powerpuff Girls and cause havoc. When they were revived by Him, their personalities began to differ, although they still strive to have fun while causing destructive havoc and destroying the girls. Being boys, they are extremely violent and confrontational to the point that they're often fighting even one another with very little provocation at all, and have only a fraction of the girls' intelligence. They like to be gross and insult others like putting slugs, spitting, cracking bones, throw scabs, etc.

While all of the boys have the basic abilities of the girls like flight (even faster and with kick in the afterburners that generate smoke makes target can't see and breathe), superhuman strength and speed, limited invulnerability, x-ray vision, heat vision, and energy projection; channeling lightening screaming dive with their silhouettes for the final blow. Each boy has an ability, for example, Boomer has the power to create a baseball bat out of electric energy which can be used to deflect projectiles, such as Bubbles's electricity balls. And Butch has displayed the ability to create an Energy Shield which absorbs Buttercup's electric thunder claps. Both abilities have not appeared since "The Boys are Back in Town," and Brick is the only one who had not portrayed his own unique ability, though it may be his Laserbeams, which only he is seen using and is a distinctly lighter shade of red. in "The Boys are Back in Town," they revealed that they could use two powerful and unique team maneuvers, that is equivalent to the "Powerpuff Megablast" (girls are blue in color, boys are green in color, their powers are equal that deflect each other). Another one is shooting a 3-in-1 sonic wave that make the target blow away. These techniques has not been specifically named and, like the Boys' individual powers, it has not been seen since "The Boys are Back in Town." Realizing Mojo and Him's ridiculous obsession with destroying the Powerpuff Girls, they promptly decided to bury the feud and take leave of both of them.

They also have a team maneuver called "Ballistic Barrage" (The boys jump down to ground level and rush toward the girls. They leap from building to building, zigzagging down the street, and fly high before dive-bombing their targets. All three girls are subjected to a merciless battering, which does not end until they have been drilled into the pavement. Then the boys jump out of the way.) in the first appearance.

The boys are stronger than the girls. They have more endurance than the girls and seem to have unlimited energy and power. Their energy never wears down or lessens in battle. Instead, they continue to hit with no signs of needing rest. In direct combat, they are simply unbeatable as displayed by the girls' constant struggle to defeat them. 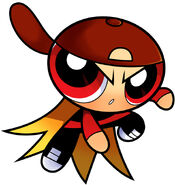 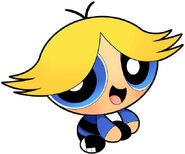 The Rowdyruff Boys in FusionFall

Boomer in Powerpuff Girls Z
Add a photo to this gallery
Retrieved from "https://ideas.fandom.com/wiki/The_Rowdyruff_Boys?oldid=562921"
Community content is available under CC-BY-SA unless otherwise noted.