The Nutcracker Prince is a live action, adventure, fantasy and comedy film from 2020, directed by John Faverou and produced by Jon Favreau, Brigham Taylor, combined with some element of the real image.

The film is a Remake of the 1990 Warner Bros. animated film with the same name and based in the E.T.A Hoffman' story of The Nutcracker and The Mouse King and the Tchaikovsky's Ballet Adaptation. It is distributed by Walt Disney Company and Dreamworks Pictures.

Clara's family celebrates Christmas Eve with a big party for their guests. Clara and her brother Fritz eagerly wait for the eccentric Uncle Drosselmeyer to arrive with his special gift. This turns out to be a great automatic toy castle, with soldiers moving and swans swimming in its pit. In addition, it brings to Clara a special gift, a nutcracker, and also tells the story of how the Nutcracker became King of the Dolls.

the same CGI animation was used, as they did in The Jungle Book (2016) and Beauty and the Beast (2017) for the animations of Mouse King, Mouse Queen and the rats.

Differences to the 1990 animated film

Chiwetel Ejiofor as The Mouse King

Susan Sarandon as The Mousequeen 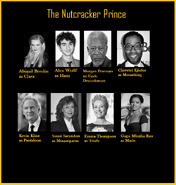 the film's cast
Add a photo to this gallery
Retrieved from "https://ideas.fandom.com/wiki/The_Nutcracker_Prince_(Live-Action_Remake_2020)?oldid=2150825"
Community content is available under CC-BY-SA unless otherwise noted.