The Dead Daisies were formed by Jon Stevens and David Lowy in 2012. The singer-songwriter and guitarist got together after David Edwards, ex-manager of INXS, reintroduced them.[3]

The band's self-titled debut album was recorded in two weeks at Wishbone Studios in Los Angeles in 2012 with American producer/engineer and multi-instrumentalist John Fields.[4] The album was released in North America on 9 August 2013 through Caroline/Universal, and later released in the United Kingdom in mid-November 2013. "Lock N' Load", their first single, was co-written by Slash, who also played guitar on the track.[5] The song was a Rolling Stone magazine Daily Download on 25 July 2013[6] and was also available on the website of BBC Radio 2.[7] The song's music video appeared on more than 20 outlets including Much Music. The single was released in the United Kingdom on 28 October 2013.[8]

The band toured in 2013, including opening for ZZ Top[9] and joining Aerosmith on their Australian and New Zealand tour.[10] This was followed by the 25-date Rockstar Energy Drink Uproar Festival in August and September 2013 (with Jane's Addiction and Alice in Chains, among others).[11] These shows were performed by the first full lineup of the band, which consisted of Lowy and Stevens along with drummer Frank Ferrer, guitarist Richard Fortus, bassist Marco Mendoza (Whitesnake/Thin Lizzy), and pianist Dizzy Reed (from Guns N' Roses). Lead singer Stevens performed for a while with casts on his hand and leg as a result of an injury sustained when escaping from a crocodile on a fishing excursion in Australia.[12]

In the fall of 2013, The Dead Daisies played 18 shows in the United Kingdom with the Black Star Riders.[13] On 20 November, they played the Underworld rock club in Camden, their first UK show as headliners.[14] The band finished off their touring schedule in 2013 with a gig at The Barby in Tel Aviv, Israel.[15] By this time the band consisted of Lowy, Stevens, Fortus, and Reed, along with new recruits Charley Drayton on drums and Darryl Jones on bass.

"Lock N' Load" was also played in football stadiums, including at Wembley Stadium during the sold out NFL American football game between the Jacksonville Jaguars and the San Francisco 49ers on 27 October.[16]

Coinciding with the tour of the UK, Britain's Classic Rock magazine included a feature of The Dead Daisies in its November 2013 issue.[17] The band was also November's spotlight artist for both Metal Hammer and Classic Rock's websites.[18] In a Classic Rock magazine poll, Lock N' Load was voted 15th best song of 2013 out of 100 songs.[19]

In February 2014, the Dead Daisies regrouped with the line-up of with Lowy, Stevens, Fortus, and Reed, with a returning Mendoza and new drummer John Tempesta (The Cult) to undertake their first full headline Australian tour [20] plus shows supporting Australian rocker Jimmy Barnes for two shows: Twilight At Taronga, at Taronga Zoo Sydney, and at the Bateau Bay Hotel.[21]

The band embarked on two US tours in 2014, joining the Bad Company/Lynyrd Skynyrd tour in July,[22] followed by the Heroes Tour with Kiss/Def Leppard in August.[23] Both tours were a resounding success.

During the summer of 2014, The Dead Daisies released the EP Face I Love with four new recordings including 'Face I Love', 'Angel In Your Eyes', 'Your Karma' and a cover of The Beatles Helter Skelter (song).[24] Along with the EP, a Facebook app was launched where fans would send in pictures of themselves to try and win prizes.[25]

At the end of October 2014, The Dead Daisies were invited to join the 4th KISS Kruise, which sails from Miami to the Bahamas.[26]

The band would finish their touring commitments in 2014 with a second visit to New Zealand as guests of Jimmy Barnes under the banner of the 'Angel In Your Eyes' tour to coincide with the release of the same titled single, with four dates in Auckland, Dunedin, Christchurch and Hamilton,[27] followed by a headline tour of Australia.[28] The Dead Daisies played their first ever headline shows in Perth on the 4th of December and Brisbane on the 5th.[29]

In late Feb 2015, The Dead Daisies became the first western rock band to play Cuba since the Obama administration reopened trade ties[30] and made history as part of a cultural exchange as guests of the Cuban Ministry of Culture, Cuban Institute of Music and the Cuban Rock Agency.[31] This tour saw Lowy, Fortus, Mendoza, and Reed joined by returning bassist Darryl Jones and new drummer Brian Tichy, in addition to which vocalists John Corabi and Bernard Fowler joined the band in place of the absent Stevens. During their visit, the band jammed in studio with Cuban musicians, played an energetic sold out show at Havana's Maxim Rock Club, visited young Cuban musicians at the National Institute of Music and finished with a performance at the Concert for Peace (Roc Por La Paz) in front of over 6,000 fans. It was an unforgettable week as the band members immersed themselves in Cuban culture; amongst their feeback David Lowy quotes it being "one of the best musical experiences of my life".[32]

On 16 April 2015, The Dead Daisies officially announced Corabi would remain with the band as lead vocalist, and that Stevens would no longer be a member of the group.[33] The band headed for Sydney, Australia, and with drummer Jackie Barnes, son of Jimmy Barnes, sitting in, booked into Studio 301 with co-producer Craig Porteils (Guns N' Roses/Billy Idol), to complete the recording of their second album, Revolución.

In June 2015 the band (featuring Tommy Clufetos on drums) supports KISS again on their European tour, and also takes in the Rock in Vienna Festival, Download Festival UK and Graspop Metal Meeting Belgium. The Dead Daisies will continue to support the KISS tour on its Australian leg in October 2015.[34]

In late July 2015, The Dead Daisies joined Whitesnake for a limited tour run in the US that ran until mid August. The groups met up for their first US show in Westbury, NY and finished things off in St. Charles, MO bringing American audiences the much anticipated album Revolucion as well as the world premier of the documentary, titled the same, of their historic trip to Cuba on Twitter. In October 2015 The Dead Daisies will rejoin KISS for the Australian leg of the KISS Tour finishing things up on the KISS Kruise V. In November 2015 The Dead Daisies are rejoining Whitesnake in Moscow, Russia touring across Europe, making a stop to join Judas Priest in Frankfurt, Germany.

On 28 January 2016 it was announced that Richard Fortus (2013–2016) and Dizzy Reed (2013–2016) would be taking part in the massive Guns N' Roses "Not in This Lifetime... Tour" and that Doug Aldrich - Lead Guitar (2016–present) would be joining the band. With Aldrich, the band recorded their new album Make Some Noise in Nashville with producer Marti Frederiksen (Aerosmith, Gavin Rossdale, Mötley Crüe, Buckcherry) during February & March 2016. Make Some Noise will be released globally on SPV Records on August 5.[35] The band also announced European dates[35] and an US tour with KISS[36] for the summer as well as their first Japanese show at Loud Park festival in October.[37]

The Dead Daisies kicked off their 2016 live appearances as special guests at Musikmesse Frankfurt with performances on the main stage followed by a guest slot with all-star band The Hollywood Vampires in Germany. On 14 July the group set off on the Make Some Noise Tour at Bang Your Head Festival in Balingen, Germany. The Dead Daisies played several more festivals as well as their own sold out shows throughout the UK and Europe including an acoustic show at Hard Rock Cafe in Prague and at Maidstone's prestigious 'Ramblin' Man Fair' on 23 July 2016, finishing their European run at Komplex 457 in Zurich, Switzerland. The band released their much anticipated third studio album 'Make Some Noise' on 5 August 2016.

On 10 August 2016 The Dead Daisies joined KISS on their "Freedom To Rock Tour" with shows across the US. For the first time The Dead Daisies included headline concerts in Los Angeles at the famous Whisky-A-Go-Go and Webster Hall in New York. After doing a show for fans of the NFL team Arizona Cardinals, The album's title track 'Make Some Noise' was adopted for their touchdown song.

In October The Dead Daisies paid their first visit to the Land of the Rising Sun, Japan, to play the Loud Park Festival. They continued their journey with their fist USO Tour playing shows for the US Military services in South Korea. In early November the band rejoined KISS on the KISS Kruise VI for a record third time, then set off for a massive UK and European trek on a co-headline tour with Irish rock band The Answer to finish off 2016 with tickets selling out well in advance.

On 19 May 2017 The Dead Daisies will be releasing a new album titled 'Live And Louder' featuring sixteen songs recorded during the UK/Europe Tour from the fall of 2016. Included is a 'Live And Louder' documentary DVD showcasing the 'Make Some Noise World Tour' and a massive photo booklet. Later in the year the band will be heading to South America to play in Argentina and Brazil for the first time as well as some headline US shows kicking off the summer. The band will also be revisiting Japan after an unbelievable response with a tour confirmed for July. 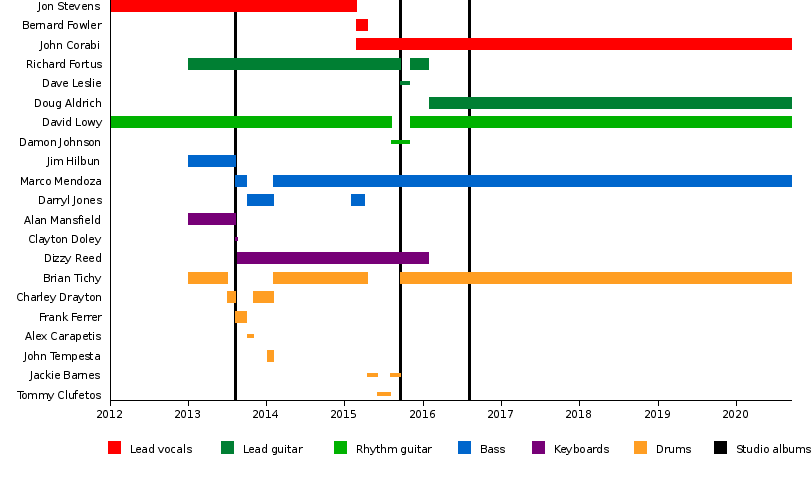 Retrieved from "https://ideas.fandom.com/wiki/The_Dead_Daisies?oldid=2346962"
Community content is available under CC-BY-SA unless otherwise noted.