The Badly-Damaged Face Paints is an American comic strip series created by Emilia Houghton, eventually being part of the Moonlake Comics franchises. having its first start in June 25th, 1990 as a series of comic strips. Its success led to the creation of its comic book series, a television series in 2000, a film adaption in 2007 and others. The main series is confirmed to be ending on May 12th, 2021 with an epilogue mini-series, named The Badly-Damaged Face Paints: Moving On, slated for its June 14th, 2021 release.

The badly-injured Face Paints have shenanigans in the comic strip series.

Planning stages for the Badly-Damaged Face Paints started in November 1988 while Emilia decided she wants to do a comic. When Emilia got a big comic creator kit for Christmas the next month, she decided to use it to make a random, fun comic about a talking circle. Proving to be successful, Emilia decided to make her first comic project: a horror comic about the zombie Face Paints who kill innocent people. The production started in New Years Day in 1989 where she made up characters and the setting for the series.

It seemed to run smooth until August 1989 when Emilia suddenly felt not happy with how the projects going. She felt that it wouldn't make sense if she started off her comic career making a horror comic book. A month later, she then thinked: "What if I made those damaged Face Paints a comedy series?". Thinking of it, she decided to ditch the horror element entirely and completely recreate the project from the ground-up, and retooled the zombie Face Paints into the lovable Badly-Damaged Face Paints we all know today. Production went on with no problems and the first strips were eventually released in TBD 1990 with critical acclaim and gained popularity, so much that Emilia decided to open up Moonlake Comics the following year.

Arielle (and the early Stomach) 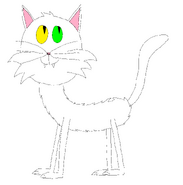 Dana.
Add a photo to this gallery

Ending of the comic strips and the franchise

On November 13th, 2020, it was announced that the Badly-Damaged Face Paints comic stripes will come to the finish with the final comic strip expected to arrive on April 2021. Despite this, it was confirmed that their adventures are "far from over" and will still have adventures in terms of television series and the comic books.

However, on April 15th, 2021, it was later announced via Facebook and Twitter that Moonlake is retiring the The Badly-Damaged Face Paints franchise entirely, being Emilia's decision, stating "After 31 years, we are very sad to confirm that I have made my decision to have end the adventures of the Badly-Damaged Face Paints. It was a very hard decision, but it had to be made, so we can give other IPs, especially Samara, the spotlight and love. The Badly-Damaged Face Paints, after the end of the year, will end their adventures. Expect the final issue in May, as I am having a epilogue mini-series coming up in June, which is two months from now. The second television series, which is set to have a second season, is to be decided whether it would have to be reversed or keep them running as their final adventures. Thank you. Love, Emilia."

Retrieved from "https://ideas.fandom.com/wiki/The_Badly-Damaged_Face_Paints?oldid=2703291"
Community content is available under CC-BY-SA unless otherwise noted.