The Bad News Bears: The Animated Series is an American-Canadian-Philippine young adult animated comedy television series, which is based on the 1976 live-action film of the same name and serves as a continuation/sequel of the original film. It airs on Comedy Central, FOX, and streams on HBO Max, while in Canada, it airs in the CTV Comedy Channel, and as for the Philippines it streams on JACK TV, with new episodes coming every Friday. The show has one season so far, but it has an upcoming second season and a greenlit third season so far.

Taking place before, during and shortly after the events of the 1976 film in the town of Southvale, CA, the animated series focuses on the Bears, a youth baseball team consisting of misfit children and teenagers and their middle-aged coach, Morris Buttermaker and their many adventures and misadventures. Many characters from the original appear in this show, aside from the Bears and Buttermaker, such as Mr. Whitewood, Toby's mayor father, but new characters exclusive to the series are introduced as well, aside from that, reimagined characters from the sequels, reboot and television series.

Most episodes of the series usually involve the Bears in actual baseball games or practice but there are some episodes that are exceptions.

Note: * - Characters exclusive to the series

Morris Buttermaker (voiced by Charlie Matthau) - Morris Buttermaker is the alcoholic coach of the Bears, who also doubles as a part-time swimming pool cleaner and serves as Amanda's father figure. He used to be Ms. Wurlitzer's (Amanda's mother) boyfriend, many years prior to the movie, but he broke up with her thanks to his alcoholism.

Amanda Wurlitzer (voiced by TBA) - Amanda is the team pitcher, who enjoys girly things, as much as baseball and hanging out and playing with boys. She also serves as one of the de-facto leaders of the team when Buttermaker isn't around and in her spare time, she sells maps. When she was younger, Buttermaker taught her how to play baseball.

Kelly Leak (voiced by TBA) - Kelly is an edgy and cool bad boy who's said to be the best athlete in town. He rides around in a Harley-Davison motorcycle and hangs around with girls. He is constantly being crushed on by Amanda and Ogilvie. He also serves as Amanda's second-in-command when Buttermaker isn't around too. He switches from left to center field until "A New Bear on the Block."

Rudi Stein (voiced by Matthew Moy) - A neurotic, insecure and nervous boy who serves as the team reliever and sometimes a backup outfielder. In his spare time he frequently pays visits to "girly" websites such as Barbina.com (a pastiche of the old Barbie website circa the mid to late 2000s) despite the other kids making fun of him.

Ahmad Abdul Rahim (voiced by Paul-Mikel Williams) - Coming from a family of baseball players, Ahmad is the right field player of the team, who is a big fan of Hank Aaron, the real-life baseball star. Somewhat a perfectionist, he rips his uniform in shame if he makes mistakes. He enjoys the horror genre, but he shows a big dislike on the novel Midnight thinking it's trash. He's a skilled musician, playing the keyboard. In one episode, he rips his uniform out of grief as his favorite baseball player has died of old age.

Mike Engelburg (voiced by TBA) - The team's plus sized catcher who loves animals such as his pet cat, Sasha, hurling insults at rivals, being a dungeon master in his many DUNGEON! campaigns, and cooking.

Alfred Ogilvie (voiced by TBA; singing voice provided by Ken Page) - Serving as Buttermaker's loyal assistant, Ogilvie does the stats and sometimes plays the backup outfielder and first baseman part, although he feels embarrassed playing these roles as he thinks he isn't that much a good baseball player. In episode three, it's revealed he's a college student majoring in math. In one episode it's revealed he has a baritone singing voice in stark contrast to his normal voice.

Karen Galang* (voiced by Shelby Rabara) - Born into a wealthy family, Karen is sent off to join the Bears, as her mother is willing to invest in the team. She starts off as sassy, flamboyant, and spoiled, but over time she changes into a slightly kinder, yet hilarious individual, who finds Buttermaker cute.

The producers of the series wanted to capture the spirit of the original, so instead of making it kid-friendly, they had to make it suitable for a teenage/young adult audience by making the characters still cuss just like in the source material, however they put up a warning in the beginning of each episode that states:

"The following episode of The Bad News Bears: The Animated Series you are about to watch may contain slurs that offend many people. Also, this may contain scenes of underage smoking and drinking that may harm impressionable youth. Viewer discretion is advised."

Although the original film takes place in the mid-1970s, there are many elements that may fit in more with later decades such as hipsters, goths/emos/scene kids, cell phones, the internet, laptops, etc.

Graphic novel adaptations of certain episode of the series have been planned out, along with free baseball cards included. Aside from that a video game entitled, Bad News Bears: Strike Up! is planned where players can create and customize their own characters to play along with the Bears.

Ogilvie as he appears in the series 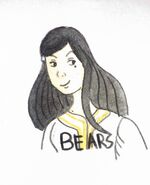 Retrieved from "https://ideas.fandom.com/wiki/The_Bad_News_Bears:_The_Animated_Series?oldid=2692308"
Community content is available under CC-BY-SA unless otherwise noted.