The Amazing Spider-Man is an American computer animated web series based on the Marvel Comics superhero, Spider-Man. The series is created for Disney+ and produced by Marvel Animation. The show centers around Peter Parker uncovering the secrets and mystery behind the presumed deaths of his late parents, Richard and Mary Parker.

Over the course of the series Peter's friends and classmates gain spider powers of their own; Gwen Stacy as Ghost-Spider, Miles Morales as Kid Arachnid, Anya Corazon as Spider-Girl, Eddie Brock as Venom and Cindy Moon as Silk. Together they form a spider-themed team, the Web Warriors while his best friend Harry Osborn becomes Neo Goblin. The Show features the appearances from various well-known Marvel superheroes; including the Avengers, the X-Men, the Fantastic Four, Moon Knight, Luke Cage, Daredevil, Elektra and Doctor Strange.

The series' character designs and the art style are based on the early first season promotional artwork for Marvel's Spider-Man (2017) by Patrick Brown.

This article is under the ownership of Dino-drones!

Peter Parker was an average high school student in New York City with a keen scientific mind that was bitten by a genetically enhanced spider during on a school field trip to Oscorp Labs and was given amazing superhuman-like spider powers. After tragically losing his beloved Uncle Ben Parker at the hands of a burglar, Peter then decided to uses both his powers and talents for good by becoming a superhero, the Amazing Spider-Man to honor the legacy of his Uncle Ben with his famous motto and mantra he lives by, "With great power, there must also come great responsibility". Spider-Man will face many formidable supervillains in the criminal underworld, including The Kingpin, the Green Goblin, Doctor Octopus, Venom, Shocker & Clash, Rhino, Electro, Scorpion, Vulture, Sandman, the Lizard, Mysterio, Kraven the Hunter, Carnage, Stunner, Vermin, Mr. Negative and many more.

In addition, Peter embarks on a mission to uncover the mystery of genetic spiders origins at Oscorp, finding what really happened to his parents, Mary and Richard Parker who supposedly died in plane crash 12 years ago and uncover the secrets behind the Gentleman, Gustav Fiers.

The show begins with Peter being enrolled at Horizon Academy, a futuristic high school owned by it's headmaster, Max Modell. While being Harassed and teased by Flash Thompson and his popular posse, Peter is close with his classmates and friends Gwen Stacy, Harry Osborn and Miles Morales. While Spider-Man continuously stopping petty crimes, he unknowingly gains the attention of the Kingpin, the feared rumored crime lord who organizes and oversees crimes throughout New York City.

The Strategic Homeland Intervention, Enforcement and Logistics Division is a secret US military law-enforcement agency led by Nick Fury and operates from the Helicarrier.

A family/Superhero team of adventurers who gained four individual superpowers after being exposed to a Cosmic Ray storm on a space mission through the Van Allen belt. Their uniforms are combination of their modern, ultimate and classic with a blue/black color scheme

Guardians of the Galaxy

A team composed of six of Spider-Man's formidable villains that was founded and organized by Doc Ock and the King Pin with the sole purpose of destroying Spider-Man. The group was soon followed by it's successor, led by Alistair Smyth. The following successor of the two groups became the Sinister 7, led by the Green Goblin.

The group successor of the Sinister 6 and 7. The group is comprised of 13 different villains of Spider-Man. The team is organized by Doctor Octopus and employed by the Kingpin. It was initially to be named the Sinister 9, however it was extended to 13 when Frightful Four members Raptor, Whirlwind, Pretty Persuasions and Agent Orange joined up.

A paramilitary-terrorist organization founded by the Red Skull during WWII to the present day originally as a sub-science division of the Nazis. Red Skull separated it from the German forces as it's own entity, using advanced technology for Hydra's dedication for world domination.

A group of super criminals and enemies of Thor.

Animation services are provided by CGCG and House of Cool. 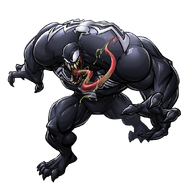 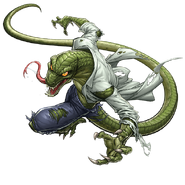