Thanos is a fictional supervillain appearing in American comic books published by Marvel Comics. The character was created by writer-artist Jim Starlin, and made his first appearance in The Invincible Iron Man #55 (cover dated February 1973). Thanos is one of the most powerful villains in the Marvel Universe and has clashed with many heroes including the Avengers, the Guardians of the Galaxy, the Fantastic Four, and the X-Men.

The character appeared in the Marvel Cinematic Universe, portrayed by Damion Poitier in The Avengers (2012) and by Josh Brolin in Guardians of the Galaxy (2014), Avengers: Age of Ultron (2015), Avengers: Infinity War (2018), and Avengers: Endgame (2019) through voice and motion capture. The character has also appeared in various comic adaptations, including animated television series and video games.

Appearances in Idea Wiki (by Author/User) 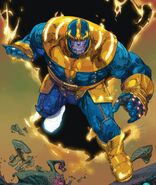 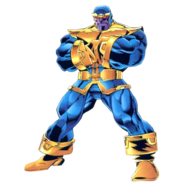 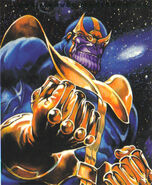 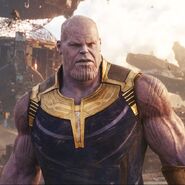 Add a photo to this gallery
Retrieved from "https://ideas.fandom.com/wiki/Thanos?oldid=2713262"
Community content is available under CC-BY-SA unless otherwise noted.