Teresa Parker (also called Teresa Durand) is a fictional character from Marvel Comics, appearing as a supporting characters in the Spider-Man comics. The character, first appearing in Amazing Spider-Man: Family Business #1 (April 2014), is the long lost younger sister of Peter Parker / Spider-Man. After the death of their parents, Peter was sent to live with their Aunt May and Uncle Ben, while Teresa, whose birth had been kept a secret, was adopted. Many years following the deaths of Richard and Mary, Teresa was personally recruited into the C.I.A. by Nick Fury. Teresa's parentage became a mystery, even for her. 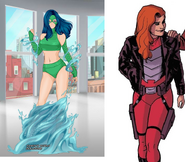 Concept of Teresa Parker / Iron Phoenix in Marvel: All New, All Different Chronicles

Teresa Parker as the Black Widow in The Amazing Avengers 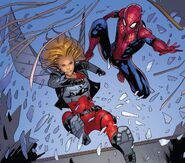 Add a photo to this gallery
Retrieved from "https://ideas.fandom.com/wiki/Teresa_Parker?oldid=2717791"
Community content is available under CC-BY-SA unless otherwise noted.