The Teenage Mutant Ninja Turtles (often shortened to the TMNT or Ninja Turtles) are four fictional teenaged superhero anthropomorphic mutant turtles. Named after Italian Renaissance artists, they were trained by their anthropomorphic rat sensei Master Splinter in the Japanese martial art of ninjutsu. From their home in the sewers of New York City, they battle petty criminals, evil overlords, mutated creatures, and alien invaders while attempting to remain hidden from society. They were created by Kevin Eastman and Peter Laird. The characters originated in comic books published by Mirage Studios and expanded into cartoon series, films, video games, toys, and other merchandise. During the peak of the franchise's popularity in the late 1980s and early 1990s, it gained worldwide success and fame. 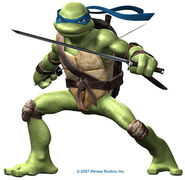 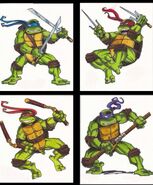 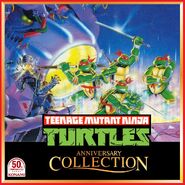 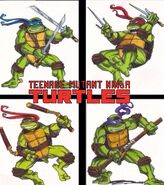 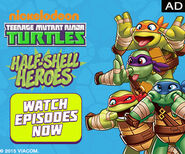 The great quotes of Leonardo

The great quotes of Michelangelo

The great quotes of Donatello

The great quotes of Raphael
Add a photo to this gallery
Retrieved from "https://ideas.fandom.com/wiki/Teenage_Mutant_Ninja_Turtles_(group)?oldid=2704041"
Community content is available under CC-BY-SA unless otherwise noted.