Defend the world from random threats

The leader and one of the five founding members of the Teen Titans. Before that, he was trained by, and served as the sidekick to Batman until he became a solo-fighter and the protector of Jump City. He later took the moniker of Nightwing after overhearing news of a new Robin (Bruce Wayne's son Damian) patrolling on Gotham City[1].

A humanoid alien female and the Princess of a planet called Tamaran and a founding member of the Titans with the abilities of Flight, Superhuman Strength, Speed and Stamina and the power to liberate destructive Green energy from her body. She is also a member of the Blue Lantern Corps[2].

A founding member of the Titans who became a deformed mesh of flesh and machine following an unelaborated "accident" which caused more than half of his body to be replaced with cybernetic implants.

A Half-Human Half-Demon Sorceress, the daughter of the fiery demon Trigon and founding member of the Titans with the abilities of Flight, Dark Energy Manipulation and to summon her soul-self.

A shapeshifter who can morph into any beast of the animal kingdom, ranging from a microscopic amoeba to the largest of the ancient dinosaurs, and is a founding member of the Titans.

The teenage Princess of Markovia with the abilities to manipulate the elements of Earth, Electricity, Ice and Metal who initially had trouble controlling her powers until she was found, healed and trained by Superman to become the heroine she wanted to be and is the first expanded member of the Titans. She is in a romantic relationship with Beast Boy[3] and is a very close friend to Starfire. She is also the founding member and leader of the Knights of Rao, a group of young heroes dedicated in hunting and humiliating every tyrant to save the world and maintain Superman's honor. 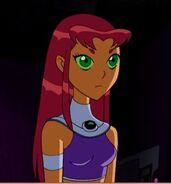 Terra
Add a photo to this gallery