The show centers around three friends named Blu-J, Rosetta and Volt, whom are part of a band named the Super SutaritoBando Trio, and are also a superhero team who protect their home and fictional city of Starlightopolis from evil and go on crazy and fun adventures with each other.

The Super SutaritoBando Trio are three kids who consist of Blu-J, Rosetta and Volt are three young heroes who have special powers and abilities. Whenever their not saving the world, they're either practicing for their gigs or just hanging out like good friends. 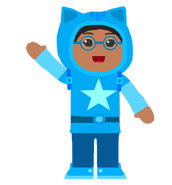 Add a photo to this gallery
Retrieved from "https://ideas.fandom.com/wiki/Super_SutaritoBando_Friends?oldid=2090780"
Community content is available under CC-BY-SA unless otherwise noted.