Start a Wiki
Super Smash Bros 4Ever All-Stars is a upcoming video game of the Super Smash Bros. series that will be released for the Wii U and 3DS sometime in the year 2018. It will include 53 playable characters, and will also include 12 DLC characters as well.

Full Roster
Add a photo to this gallery 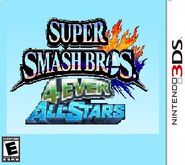 Wii U Cover
Add a photo to this gallery
Retrieved from "https://ideas.fandom.com/wiki/Super_Smash_Bros_4Ever_All-Stars?oldid=124025"
Community content is available under CC-BY-SA unless otherwise noted.