The Amazing World of Gumball

My Little Pony: Friendship is Magic

The mode known as "Mission Mode", is a new content added to the game. It comes in two types: General, and Character. General Missions are similar to the Event Matches froom previous Super Smash Bros. series. You have to clear a certain event on the following conditions to clear the mission. Character Missions are very similar to the Naruto: Clash of Ninja  series, each character has ten different missions and are ranked at the end.

Every character has ten missions that are all the same, but with different characters and objectives(combos only).

There are five different difficulty levels that appear in Arcade Mode, Mission Mode, and Versus Mode.

Unlike the previous game, each different character have thier own rank instead of thier being just one for the main player in the game. Ranking up with different characters may unlock new characters. After clearing the conditions, they must be bought at the shop for a certain price of coins(shown in parenthseis at the end). Coins are earned by playing any mode in the game.

There are a few DLC Characters in the game, and have to be bought at the eShop(3DS/Wii U) or the Playstation Store(PS Vita/PS4). There free to buy at the Smash Shop in the game after thier bought from eShop/Playstation Store, but are not available until all non-dlc characters unlocked and purchased as well.

They also come in bundle packs, so you can get two characters at once, but costs twice as much. 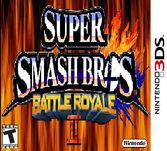 PS4 cover
Add a photo to this gallery

Retrieved from "https://ideas.fandom.com/wiki/Super_Smash_Bros._Battle_Royale_II?oldid=1551036"
Community content is available under CC-BY-SA unless otherwise noted.