Starcraft (alternatively known as Starcraft: The Beginning)[4] is an 2020 American Computer Animated

the Video Game of the Same Name

Science Fiction action War film directed by Guillermo Del Toro and written by Pamela Patter and . Based on the video game series of the same name, the film stars George MacKay, Bruce Willis, Craig Fairbrass,James McAvoy, Andrew Garfield  Steve Carell, Robert Rodriguez,Denzel Washington, and Daniel Craig. The film portrays the initial encounters between the humans and the Robots and takes place in a variety of locations established and Final Franchise in the video game series.[5]

The film was first announced in 2010 as a project partnership between Allspark Pictures and the game's developer, Blizzard Entertainment.[6] Starcraft was premiered in Paris on August 31, 2020, and was released by Universal Pictures in the United States on September 4th, 2020.(Along with Hanazuki and Friends: Out of this World)[7]  It was Originally Released April 15th, But Delayed Due to the COVID 19 Pandemic.Though it was a financial Agreement at the domestic box office and globally,[8] and the film and script received Generally Positive reviews from critics, the film has grossed $439 million worldwide, surpassing Pokemon Detective Pikachu  as the highest-grossing video game adaptation of all time.

A mythic and emotionally charged hero's journey, "Starcraft" tells the story of Sylvester, a brilliant and gifted young man born into a great destiny beyond his understanding, must travel to the most dangerous planet in the universe to ensure the future of his family and his people. As malevolent forces explode into conflict over the planet's exclusive supply of the most precious resource in existence-a commodity capable of unlocking humanity's greatest potential-only those who can conquer their fear will survive. 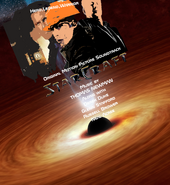 Retrieved from "https://ideas.fandom.com/wiki/Starcraft(Film)?oldid=2586555"
Community content is available under CC-BY-SA unless otherwise noted.