Sonic the Hedgehog 2 (ソニック·ザ·ヘッジホッグ2 Sonikku za hejjihoggu 2?) is a 2015 Live Action American Comedy Adventure film, published by SEGA. It was released in Japan on 21 November 2014 and in North America and Europe three days later on 24 November. It is the sequel to Sonic the Hedgehog and was directly followed by Sonic the Hedgehog 3 in 2016. The film formally introduces Miles "Tails" Prower as an addition to the cast.

The story follows Sonic the Hedgehog (Elijah Wood) and Tails (Thomas Sangster) on their mission to stop the evil Doctor Eggman (D.J.Hazard) from obtaining the Chaos Emeralds to power his Death Egg. Sonic and Tails must defeat Eggman's army and free their friends.

Sonic the Hedgehog (voiced by Elijah Wood) was looking for new adventures following the events of the previous game when he discovered West Side Island. Sonic landed his personal plane, the Tornado, on the island to check it out and relax, not paying attention to the fact that a certain metallic flying object was chasing him and suspiciously landed on the other side of the island.

It is said that a very long time ago, the people of West Side Island used a mysterious stone to advance their civilization and achieve prosperity. However, when those people tried to use the stone for the wrong reasons, their prosperity vanished overnight. It is believed that the kami sealed away the stone within the island's depths.

One day shortly afterward, Sonic noticed a shy orange fox tagging behind him, who nervously scurried back into the welcoming shade of the still palm trees when he was spotted. When Sonic was not looking, the peculiar fox barely managed to keep up with the blue hero. The fox's name was Miles Prower (Thomas Sangster), though he was known as "Tails" due to his two special tails, which often made him the target of bullying. However, something changed in Tails when he saw Sonic come to the island, and he made up his mind that he wanted to be cool like Sonic. Realizing that the young kid was harmless, Sonic made friends with him and allowed him to hang around as he freely explored the island.

On an early afternoon, Tails discovered a lone aircraft stranded at the beach. Being a budding fan of machinery and vehicles, he rushed to take a closer inspection. He was admiring its magnificent build until he noticed that Sonic was taking a nap under its wing. Realizing that Sonic owned the plane, Tails gently retreated to the other side of it so as not to wake him. Suddenly, an ominous flash occurred in the direction of the nearby forest, followed by a terrific explosion. The wild fire blew away various debris, which Tails avoided by taking cover underneath the Tornado as he witnessed robots violently excavating the area. This ceaseless activity threatened to blanket the entire island in its destructive flames.

It turned out that Dr.Eggman (D.J.Hazard) detected the presence of all Chaos Emeralds after following Sonic, including the lost seventh one spoken of in the island's legend. He took the opportunity to kidnap the island's animals to rebuild his Badnik forces and finish his ultimate weapon, the Death Egg. Robotnik now ruled the factories, refineries and cities. He's grabbed control of everything except the seven Chaos Emeralds. The speedy hedgehog went off into the forest to set things right and the curious fox followed. 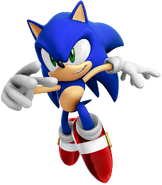 Dr. Eggman
Add a photo to this gallery
Retrieved from "https://ideas.fandom.com/wiki/Sonic_the_Hedgehog_2_(2015_Film)?oldid=1352916"
Community content is available under CC-BY-SA unless otherwise noted.