All Platforms on Christmas 2021

Bold detonates a veteran character that wasn't in the vanilla game, but has been added in this port. 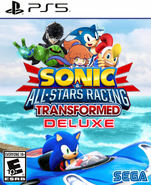 Xbox Series X boxart
Add a photo to this gallery
Retrieved from "https://ideas.fandom.com/wiki/Sonic_%26_All-Stars_Racing_Transformed_Deluxe?oldid=2703778"
Community content is available under CC-BY-SA unless otherwise noted.