Princess Sofia is the main protagonist of the Disney Junior series Sofia the First. She is voiced by Ariel Winter.

Sofia is a little girl with a commoner's background until her mother marries the King of Enchancia and she becomes royalty. Sofia learns that looking like a princess is not all that hard, but behaving like one must come from the heart.

Sofia is a young girl who lives with her mother Miranda. She becomes Royalty after her mother's remarriage to King Roland II. Being new to the entire Princess legacy, Sofia attends the Royal Prep Academy where Flora, Fauna and Merryweather show her the ropes about what being a Princess is all about. However, Sofia is caught between two messages - is being a Princess about material goods or having a good heart? It is up to her animals, led by Clover the rabbit, and a powerful amulet, to set her on the path of the heart.

Sofia is shown to have a two-sided personality: One side is that of a softhearted idealist. Sofia is shown to be very kind and compassionate. She is also shown to be loyal to her loved ones to the point of altruism. She is also willing to befriend people the large majority refuse to have anything to do with. She also believes in keeping promises no matter what. She also shows her affections by giving her loved ones warm hugs.

The other side of her personality is that of a hardheaded pragmatist. Sofia is shown to be a precocious girl who believes the proof is in the pudding. This fuels a side of her that is very investigative and skeptical. She tends to try to juggle more than she can handle, especially when it comes to her friends. This side also gives her trust issues that make her go off on her own without telling anybody and keep secrets from everyone except her Aunt Tilly and her mermaid friend Princess Oona.

There is a smaller third part of Sofia's personality that she tries to hide: Her vulnerable, scared and worried part. Many times Sofia's vulnerable side has made her question if she truly belongs with her royal friends and family. She has a tendency to worry about her own self-worth and if she can handle being a princess. While she doesn't get scared often, when she does she will lose some of her confidence, which can cause trouble for her.

Sofia is a young girl with shoulder-length wavy auburn hair. She has fair skin with rosy cheeks and large light blue eyes. Sofia's prominent princess gown has a lilac color and comes with a crystal tiara inset with diamonds and pearls, which also decorate her dress, and purple slippers with heels. Around her neck, she wears the royal family's amulet called the Amulet of Avalor. As revealed when she wears her Flying Horsemanship outfit for the first time, Sofia is extremely thin and short for a child her age which gives her a small and slender frame. She has a cute appearance that makes most people find her beautiful and adorable. Most of her clothes are purple. 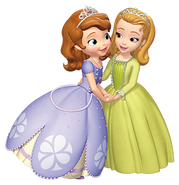 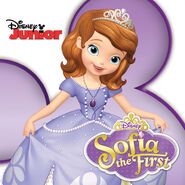 Add a photo to this gallery
Retrieved from "https://ideas.fandom.com/wiki/Sofia_the_First?oldid=1824677"
Community content is available under CC-BY-SA unless otherwise noted.