Idea Wiki
Register
Don't have an account?
Sign In
Advertisement
in: Pages stolen off Wikipedia, Non-Fanon, 1960s births,
and 25 more

He was born in Tawonga, Victoria in Australia, but moved to Vancouver, Canada when he was 4 years old in 1966.

He first appeared on stage at the age of three.[1]

Even though he knew about voice acting, Scott pursued the theater. He studied at Studio 58. After leaving, he tried to find acting jobs and worked as an Elvis impersonator for a short time. It was in the late eighties when he found himself on his way into the world of voice acting. A casting director at the time told Scott that he had wished that he'd met him a week before; he was casting for the G.I. Joe cartoon.[2]

Scott states his first role was providing voices on the The New Adventures of He-Man. His first anime role was for Project A-ko, where he provided the voices for three women.[2]

After appearing in a few films and two episodes of Highlander: The Series,[1] he provided voices for Beast Wars, as Waspinator, Dinobot, Rattrap, and Silverbolt. He has described this as the work he is most proud of. On another fan favorite show, Dragon Ball Z, he was cast as the original voice of Piccolo and various other characters. He then provided the voice of Duo Maxwell on Mobile Suit Gundam Wing and Principal Kuno on Ranma 1/2.[2]

He eventually got the call stating he was cast as Wolverine on X-Men: Evolution. He continued to play the role of Logan/Wolverine for a total of four seasons from 2000-2003. Scott was then cast in another fan favorite anime, Inuyasha, as Koga. He provided the voice of the Fullmetal Alchemist character Hohenheim, Foghorn Leghorn on Baby Looney Tunes, Ace the Bat-Hound in Krypto the Superdog, Grumpy Bear on Care Bears: Adventures in Care-a-Lot, Amergan, Gregor and the lab director on Highlander: The Search for Vengeance, and Stork on Storm Hawks. He still appears in live action shows occasionally and was in Scooby-Doo 2: Monsters Unleashed and in The Green Chain. As of October 2007, he estimates that he has provided voices to 8,500 characters.[2]

Scott is appreciative of fans because he knows what it is like to see your favorite voice actor talk as the character they provide the voice for. He says that he is inspired by Paul Frees, Maurice LaMarche, and Mel Blanc. If he had a chance to meet the late Mel Blanc, Scott has said that he would "fan boy all over him."[2] 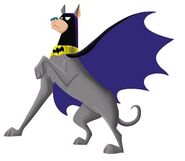 Ace the Bat-Hound (Krypto the Superdog) 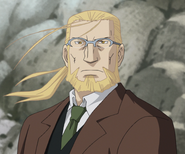