Scarlet Witch is a fictional superhero appearing in American comic books published by Marvel Comics. The character was created by writer Stan Lee and artist Jack Kirby, first appearing in The X-Men #4 (March 1964) in the Silver Age of Comic Books. She is first portrayed as a supervillain along with her twin brother Quicksilver as a founding member of the Brotherhood of Mutants. In most depictions, she is portrayed as a mutant, a member of a fictional subspecies of humans born with superhuman abilities, and, for much of the character's history, was considered the daughter of the mutant Magneto. Scarlet Witch possesses abilities to alter reality in unspecified ways and is a powerful sorceress. Scarlet Witch is later depicted as a regular member of the Avengers superhero team. She also becomes the wife of fellow superhero and teammate Vision, with whom she has two sons, Thomas and William.

The character's in-universe backstory and parentage has been changed more than once. Depicted in the 1970s as the children of golden age superhero Whizzer, a retcon in the 1980s revealed Scarlet Witch and Quicksilver to be the unknown offspring of supervillain Magneto. Born to Magneto's estranged wife in Transia, Scarlet Witch and her brother are left in the care of their adoptive Romani parents and she is raised as Wanda Maximoff (later referred to as Wanda Frank while the Whizzer was considered to be her father). In another retcon in the 2010s, it is revealed that Quicksilver and she are not mutants but were kidnapped and used as subjects of genetic experimentation by the High Evolutionary, then misled to believe Magneto was their father.

Along with starring in two self-titled limited series of her own, the character appears in animated films, television series, arcade and video games as well as other Marvel-related merchandise. Wanda Maximoff/Scarlet Witch is portrayed by Elizabeth Olsen in the films within the Marvel Cinematic Universe. Those including Captain America: The Winter Soldier (2014), Avengers: Age of Ultron (2015), Captain America: Civil War (2016), Avengers: Infinity War (2018), Avengers: Endgame (2019) and the forthcoming Doctor Strange in the Multiverse of Madness (2022), and is a lead character in the Disney+ series WandaVision (2021).

Appearance and Alternate Versions in Idea Wiki (by Author/User) 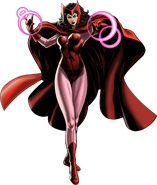 Scarlet Witch as she appears in Iago PUC's version of Marvel's Spider-Man and Marvel: All New, All Different Chronicles

The great quotes of- The Scarlet Witch
Add a photo to this gallery
Retrieved from "https://ideas.fandom.com/wiki/Scarlet_Witch?oldid=2722560"
Community content is available under CC-BY-SA unless otherwise noted.