Princess Sally Acorn is one of the main protagonists in the Sonic the Hedgehog comic series and its spin-offs published by Archie Comics. She is a Mobian chipmunk, the daughter of King Nigel Acorn and leader of the Freedom Fighters. Born as the heir to her father's throne, she was taken, as a child, to the sanctuary of Knothole Village in the Wood Zone by Rosie Woodchuck when her father was betrayed by his royal adviser, Dr. Eggman and led the Freedom Fighters on many field missions against the scientist when he took power after banishing the King to the Special Zone. After Nigel Acorn was rescued and resumed his role as king, Sally continued to lead the Freedom Fighters in the ongoing battle against the Eggman Empire.

One of Sonic the Hedgehog's most notable friends and allies, Sally is also his on and off love interest.

A younger Sally wore an outfit inspired by her younger self from the Sonic the Hedgehog animated series episode "Blast to the Past, Part 1" though with the addition of white gloves. She has also been seen in white pajamas decorated with acorn designs. When she was slightly older, she started wearing her hair (now shorter) in a ponytail, and sported an open blue vest with a collar, with a black tube-top underneath, black sports pants held up by a white belt with a square, golden buckle, and wore a pair of blue and white sneakers.

Though possessing average physical strength, Sally is very agile and capable of acrobatic maneuvers. She also has proficiency in basic combat, weaponry skills and hand-to-hand combat, and possesses high reflexes and self-defense abilities.

Sally is a natural leader and tactician, serving as the strategist and organizer of the Freedom Fighters, including coordinating her team's evacuation efforts of Station Square with noticeable results. She has a very logical mind, but has experienced enough that she readily accepts the mystical forces she encounters. However, her thought process does have its drawbacks, such as limiting her physical abilities in the Digital World to what she is capable of in the real world.

Appearances in Idea Wiki (by author/user)

Justice League: Rings of the Force

Sally appears in Justice League: Rings of the Force, with Kath Soucie reprising her role.

Sally appears as a guest character in Marvel's Spider-Man: Webbed Champion, voiced by Lacey Chabert. She appears as a member (and the second-in-command) of the Freedom Fighters alongside Sonic, Tails, Knuckles, Sticks, and Nicole in the crossover multi-part finale "Legendary Universes". Officially appearing in "Part 3: Unlimited Speed", she and her fellow Freedom Fighters help Spider-Man's team defeat EggRobo and Dr. Robotnik and solve the origins of Jarvis' robot body. During the episode, she becomes very good friends and partners with Mary Jane Watson / Tigra, as they both view each other as dedicated princesses and support each other's relationships with their respective teams' leaders. She appears again in "Part: 6: Ultimate Alliance" alongside Sonic and the Freedom Fighters (alongside the various crossover heroes) aiding the Avengers and Spider-Man's team on defeating the Regent and his army of Insectoids from the Negative Zone.

Sonic and the Tomb Raider

Sally also appears in Sonic and the Tomb Raider, voiced by Felicia Day. Still depicted as Sonic's girlfriend, Sally is also a resident of the Golden Realm, where she and Tails established a secret base of science and technology to help the island's local tribe. She also has a sisterly bond with Lara Croft, whom she urges Sonic to take good care of.

Sally is also a supporting character in Comic Con Incorporated, on which she and her friends Sonic, Tails and Knuckles are roomers in the titular fictional hotel. She enjoys the gym section, the swimming park and nearby beach (as she is shown surfing alongside Tigra, whom she is friends with), and (like Sonic and others) is also a good friend of Sabrina Spellman. First having a silent cameo in "First Marvelous Day", Sally appears officially in "Effective Fitness", on which she and Tigra go surfing with Terra.

She in her Pre-SGW and Post-SGW forms appear as a Tekken 7 Guest, with Kath Soucie and Tara Strong voicing them in a similar fashion how we got 2 different Green Lanterns in the Injustice games.

She appears with Sonic (albeit with Sally donning her Post-SGW outfit) as a Special Crossover Guest, with Tara Strong voicing her. It would also be the first time that The Loud House universe prominently features Science fiction elements. 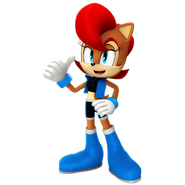 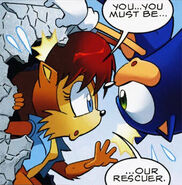 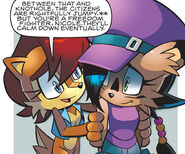 Add a photo to this gallery
Retrieved from "https://ideas.fandom.com/wiki/Sally_Acorn?oldid=2683889"
Community content is available under CC-BY-SA unless otherwise noted.