The film tells the story of FernGully, a rainforest near Mount Warning, Australia, remains identical to the original version. A curious fairy girl named Crysta saw a part of the world she and her friends (Pips and the Beetle Boys) never seen before beyond FernGully and believes humans dwell on the nearby mountain Mount Warning. But the wise sprite of the forest and Crysta's motherly figure, Magi Lune, says humans are now extinct. In the opening scene, she says that they fled, driven away by the attack of an enemy known as Hexxus, the spirit of destruction and all that is toxic to nature, never to return and presumed dead; Hexxus was defeated by Gaia, the spirit of the Earth and the fairies and imprisoned inside a tree. Crysta mentions a black cloud that she saw rising near the mountain, and Magi identifies it as smoke, but nervously dismisses Crysta's speculation that the smoke might be Hexxus, saying "There isn't a force in nature that could release him, and there are no poisons here on which he can feed. Hexxus is trapped for all time." It is implied that Magi shares Crysta's fears, but is afraid to say so openly.

By the time, Usagi, Ami, Rei, Makoto, Minako, Mamoru, Chibiusa, Setsuna, Haruka, Michiru and Hotaru travel to Australian rainforest because Makoto won 7 tickets to Australia with Earth Day coming up. Crysta, Pips and the Beetle Boys soon found out when Usagi and her friends and Mamoru enter their world. Magi arrives and reveals that Usagi is in fact the Moon Princess. According to Magi, some years prior to the events of the film, Hexxus, an evil spirit, appeared. He rose out of the Earth's core and rained down poison, destroying much in his wake and killing countless living creatures, including humans. He was finally defeated by Gaia and the fairy priestess Magi and imprisoned inside an enchanted baobab tree, which he remained trapped in for many years.

Befriending a mentally unstable yet comical fruit bat named Batty Koda who has been experimented on by humans and now has wires and antennas fused into his head, the Sailor Guardians and Crysta head to Mount Warning where she finds dead trees all marked with red aerosol paint crosses, which mark them for cutting. The camera then pans through the trees to reveal the source of the smoke, which turns out to be the exhaust from a huge tree leveler. Crysta finds male humans, and accidentally shrinks one named Zak in trying to prevent him from being crushed by a tree. He gets stuck on a spiderweb on the tree that's just about to go through a tree shredder. She tries to get him off, but can't when Batty swoops in, grabs them both off of the spider web and blames Crysta for her almost getting killed, because she did not listen to him. Sailor Moon scolds Sailor Jupiter for putting Sailor Chibi Moon in danger.

Zak goes on a wild adventure with Crysta and Batty, nearly getting eaten by Lou a hungry Goanna lizard, and unexpectedly falls in love with Crysta. Crysta is taking care of three baby animals and demonstrating greater control over nature. She and Pips begin a small contest over who can grow the more impressive plant, while Pips expresses a desire to see more of the outside world.

Suddenly, Batty arrives in a panic, warning that human poachers are right behind him. These poachers show up with their dogs and capture the three baby animals. The first rescue attempt while still in FernGully fails, and results in a huge forest fire, destroying a huge part of the forest and injuring Mother Kangaroo. The Sailor Guardians, Pips and the Beetle Boys volunteer to follow the humans to town and rescue the babies, convincing the reluctant Batty to be their guide. The Sailor Guardians, Zak Young, Pips, Batty Koda and the Beetle Boys arrive at a town amusement park. They are so fascinated by the rides, they are reminded by Batty and Sailor Venus to resume their mission.

All this time, the fairies have been healing the rainforest and Crysta finds and helps one of the poachers' dogs (she called him Boof) abandoned and caught in a trap. She takes him on a journey to the town. Meanwhile, Zak's superiors, Tony and Ralph, cut down an enchanted baobab tree that Zak had inadvertently painted an X mark on while trying to spray a fly that was buzzing around him. Unfortunately, this turns out to be the tree Hexxus is trapped in, and the cutting down and processing of the tree by the lumbermill-like leveler machine releases him. Determined to get revenge upon the fairies of FernGully (specifically Magi Lune) for imprisoning him, Hexxus gains power from the pollution, specifically the energy and smoke produced by the Leveler, as he can be seen "drinking" from it like a liquid. He manipulates the lumberjacks and their tree leveler into tearing down the rainforest in the direction of the fairies by the next morning, thereby destroying the very fabric of their world. He does this under the vocal disguise of their boss.

Usagi, Ami, Rei, Makoto, Minako, Chibiusa, Pips and the Beetle Boys meet a girl named Budgie, who is hard at practicing for the clown act. Pips flies over to her and introduces himself and his friends. Shocked by the insects, Budgie tries to swat them away, accidentally slapping Rei across the face and hitting Pips in the process. He flies into a pole and Budgie runs over asking if she's hurt him. Pips denies being hurt, but after seeing Pips weak from the journey and can barely stand, gives them shelter in her trailer. Batty has located the poachers' place, but the others ignore him too fascinated by modern human utilities. Bark and Batty go to make a rescue attempt, but Batty is caught.

Budgie tells Pips that she has been working on her clown act for years, but she has never been all that good. Pips tells her that she is trying too hard, and she should just do it. Usagi and her friends go to meet with Setsuna, Haruka, Michiru and Hotaru. Using a VHS of the original FernGully movie, the Inner Sailor Guardians discover that the tree that Hexxus is imprisoned in was cut down by Tony and Ralph, Zak's superiors. The poachers spot Luna, Artemis and Diana had located their hideout where the babies are and capture them, place them in a sack and a cage. Back at where the babies are, the animals are very scared and fear they will never get back home. Batty overcomes his terror of the situation and manages to reassure them. Then the poachers take all the cages and load them onto a big truck. At the fair, Budgie goes to a contest stand and wins a stuffed kangaroo, which reminds Ami and Pips of the babies he's supposed to be saving along with the Sailor Guardians. He tells Budgie about them and she offers to help him out.

The Sailor Guardians and the Beetle Boys all reach the old warehouse. The poachers drive off, and Budgie jumps off a ledge and lands on the truck. They drive past Budgie's grandfather, and he sees that Budgie is hanging on the truck tarp, and he drives after them. Budgie manages to get inside the car and frees all the birds in the cages. The poachers see Budgie trying to get in the car and are enraged seeing all the birds flying away. One of them climbs out of the truck and tries to get Budgie off. She manages to get away from him, but he unlatches the car she's on and sends her rolling backwards on the road. She ends up with one side of the car dangling off a cliff. When she falls, Batty catches her and manages to lift her all by himself up to the top of the cliff (in spite of her being double his size) allowing Budgie's grandfather to catch them in his net and bring them safely to solid ground.

The group then head by clown car, alongside with the Sailor Guardians, to the ship where the animals are being loaded. Pips undoes the conveyor catch so that the catches land in Budgie's grandfather's car. A struggle for the cages ensues between the poachers and the Sailor Guardians. Boof and Crysta arrive to help and Slasher turns against his former master while Sailor Moon, Sailor Venus and Sailor Chibi Moon rescue Luna, Artemis and Diana. The boat gets away and the fairies use their magic to stop it growing a gigantic tree, where the poachers were heard from no more until they are arrested by the police. Sailor Chibi Moon saves Nugget from drowning. Budgie and her grandfather adopt Slasher and Boof while all the animals and fairies return home.

Once the truth is revealed the fairies all join forces and fuse their powers together, creating a protective tree cage. Magi sacrifices herself (giving her power to the fairies and even Zak) and it is up to Sailor Moon, the Sailor Guardians, Crysta and the other fairies to defeat Hexxus. Sailor Mercury and Zak turn off the leveler, causing Hexxus to lose all the energy he was gaining from it and disappear, but he soon rips out of the machine as a giant demonic skeleton creature made of oil that breathes fire. Sailor Moon and the Sailor Guardians team-up and battle Hexxus. Crysta seemingly sacrifices herself like Magi did by allowing Hexxus to devour her in one bite, and uses her powers from inside him to grow a seed she had with her to again imprison Hexxus (together with the leveler) inside a new tree with help from the fairies led by Pips, thereby imprisoning him again. However, she emerges, unharmed and alive, from a flower soon after. Crysta sadly resizes Zak to normal size, Sailor Moon gives him and Budgie a medals looks like her Transformation Brooch and Zak sets off with Tony and Ralph to try to stop the destruction of the rainforests. Meanwhile, Crysta takes Magi's place after learning finally how to control her powers. Sailor Moon uses Moon Tiara Stardust to erase all memories of the lumberjacks expect Zak about cutting down the trees and Moon Healing Escalation to restore all the rainforests. Usagi and her friends celebrate Earth Day with Crysta, Pips, Batty and all the fairies. 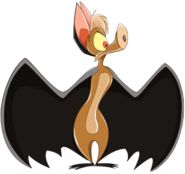 Hexxus
Add a photo to this gallery

Retrieved from "https://ideas.fandom.com/wiki/Sailor_Moon_Crystal:_FernGully?oldid=2293850"
Community content is available under CC-BY-SA unless otherwise noted.