"Yeah, we weirdos clean up nice."

Ronnie Anne Santiago is a supporting character from The Loud House in addition to the companion series called The Casagrandes. She is Lincoln's not-so-secret girlfriend, who is also Bobby's younger sister. She is voiced by Breanna Yde (Seasons 1-3) and currently, Izabella Alvarez though Ashly Burch voices her in certain media such as Video Games.

Ronnie Anne is Lincoln's schoolmate who frequently bullies and humiliates him in front of his peers. She's also the toughest girl in the school, and also the little sister of Bobby Santiago, Lori's boyfriend.

In her first appearance (albeit not physically present) she was shown to be somewhat cruel with her pranks, which caused Lincoln ridicule. Lincoln's sisters deduced correctly that she had a crush on him, but was too shy to properly show them, so she used pranks to gain his attention. Since then, she seems to have calmed down on the pranks and mean behavior towards him, though is still shown to show tough love to Lincoln, putting a sloppy joe in his pants, slapping him for kissing her at Jean Juan's French Mex Buffet (though that was a fake), and Lincoln mentions in "April Fool's Rules" that she could pulverize him when she gets mad.

She is a hardcore tomboy, as she seems to dislike girly things (at one point calling the Sadie Hawkins' dance "lame") and enjoys more boyish hobbies, such as skateboarding, pranking people and playing video games. Her goal implies she enjoys cooking too. She is shown to dislike cheesy romance, and consistent kisses, evident upon barfing at the nicknames Bobby and Lori give each other along with their kissing.

Despite being described as the toughest girl in school (at the time she made her first appearance in person), she has a soft side, as she is easily hurt by Lincoln's comments about her, (when he tries to tell his classmates he would never date her) and she has been shown to act friendly and nice to Lincoln during their "date". She can also be forgiving, as she forgave Lincoln twice for insulting her, and for trying to ditch her when she was trying to look for him to ask him to the arcade (though he thought she was trying to ask him to the Sadie Hawkins' dance). She also proves she can be grateful and kind, as she pranks Luan in return for Lincoln protecting her from Luan's pranks in the episode April Fool's Rules.

Ronnie Anne is typically a Hispanic-American 11-year-old girl with dark skin, black hair worn in a ponytail, freckles on her cheeks, and two buck teeth that stick out of her mouth. She wears a dark purple hooded sweatshirt, black jean shorts and purple shoes with pink socks worn high.

From the Series and The Casagrandes 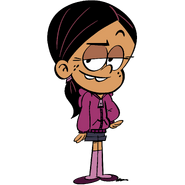 Ronnie Anne wearing her Yellow Sweatshirt from City Slickers.
Add a photo to this gallery
Retrieved from "https://ideas.fandom.com/wiki/Ronnie_Anne_Santiago?oldid=2018613"
Community content is available under CC-BY-SA unless otherwise noted.