Start a Wiki
Romeo & Juliet: Sealed with a Kiss 2: A New Generation, is an upcoming American animated romantic drama film, and a sequel for “Romeo & Juliet: Sealed with a Kiss,” that will experience the new generation of the two star crossed loving sea lions named Romeo and Juliet who were having kids, and to save the princess from a bad guy. It’s been produced by Phil Nibbelink, written by Lauren Faust, co-produced by Coltrane Mnich, and directed by Chris Columbus.

Romeo & Juliet: Sealed with a Kiss 2: A New Generation

Once upon a time, in the pacific coast of the promise land, there was a young sea lioness pup named Olivine, who was born to learn everything, she lived with her father Romeo, her mother Juliet, her sister Lilliana, and her brother Daniel, and she had two pets a Catfish and a Dogfish, when Olivine, and siblings are getting ready to go to school to learn how to write, think, read, and smart. Olivine makes new friends with Benny the crab, Nicholas the clownfish, Sammy the seahorse, and Stephanie the starfish, they played catch with them, when she got home from school, Olivine notice that the report card came from the mail, she opens it and she got As & Bs on her report card, she was so happy to see that report card, after that, at home, Olivine was asking her father Romeo and her mother Juliet who were having a hand(flipper) touch in marriage, after she puts her hands(flippers) on top of their hand(flipper) touch in marriage, they said yes, after they were married years ago, so she tickles their hand(flipper) touch in marriage, they giggled and laughed, so they kissed Olivine on each side of her forehead, and then, she gave them her report card, and they have notice that she got As & Bs on her report card, they’re so proud of their daughter, they gave her a hug, when her siblings got home from school they got As & Cs on their report cards, so they hugged each other for a happy family.

And so, the next morning, today is Olivine’s birthday today, and everyone from school were invited to come over, and the crab band were invited too, with new instruments (including the string quartet, a trumpet, a saxophone, a trombone, the guitars, the conga drums, and the drums), Olivine was so delighted to have everyone coming over to her birthday, after she and her family were exploring the places in beach of Verona, everyone who were saying, “Happy Birthday Olivine!” She was saying thank you, late at night, at home, Romeo and Juliet gave Olivine a special gift, a pendant with a magic clam shell on it, she opens it and saw a titanic ship with her part Montague & Capulet families who were all swimming in front of it, she was so delighted to have that gift, she knows that her parents Romeo and Juliet are both the most wonderful mother and father in the whole world, after she closes her gift.

At night, somewhere on the shore part of the beach of Verona, there was a young elephant seal pup named Princess Alicia who was lost and didn’t know where to find her royal family, but she was been kidnapped by a barracuda named Bucky, who just got orders from a Tiger Shark named Professor Baxter who was a most criminal master mind, so it’s up to Olivine, her siblings, her friends, and her two pets to go look for her, before they meet a coyote who was singing, and before they got into a fight with the monstrous elephant seal prince, but Olivine angrily chokes the prince right into his neck really hard, with a help of the students, the teachers, the marlins, and the dolphins, after that fight was over, Olivine gets very angry and upset with the prince for been so selfish, after they all left, the Princess gets very angry and upset with her prince for being so rude, before they got killed and eaten by the orca whales. The next day, Olivine, her siblings, her friends, and her two pets meet the marmots who were digging for a safe place home before they met King Coltrane who was looking for his daughter, with his two children, Princess Isabella, and Prince Colby, after that, he tells them a story about how he met their father Romeo and mother Juliet, with their uncles Benvolio & Mercutio, who were doing a havoc with the elephant seals, after this story was over, they went to the elephant seal beach, right next to beach of Verona, they met the soldiers, Kevin, Timothy, Zeb, and Zini, with the others, but they didn’t know where to find his daughter, but Olivine said that she and others can go look for her, and they all agree. At the titanic ship, Professor Baxter is about to have his career to take over the kingdom as a lord, after he was having award with Princess Alicia who was doing a witch craft. Meanwhile, on the ocean, Olivine and others meet the great sky blue whale, and the puffin who were very nice. She defends her siblings, her friends, and her two pets against the sea creatures from titanic ballet, Sharky the shark from shark island, and she strangles a seagull right in it’s feathery neck really hard. Olivine and others meet Kissy the kissing fish who was a nanny, but she was pretty annoying. Meanwhile, back in the beach of Verona, Mercutio & Benvolio got in serious trouble with the courtiers, Colton, Dennis, and Franklin, but Mercutio & Benvolio were escaping. Meanwhile, on the shore, and the church, Olivine and the others meet Benvolio, Mercutio, Friar Lawrence, Stellar, Arron, Zachary & Elizabeth, Lucy, Meghan, Rosalyn & Paris, Tybalt, Peterson, Gregory & Samson, Abraham & Balthasar, Skippy, Andorra, Thomas, Felicity, Tiana, and Fartlek, who were all a family of Olivine, Lilliana, and Daniel’s. So Olivine, her siblings, her friends, and her two pets are going traveling to Alaska, to Arctic, to Siberia, to China, to Tanzania, and to Indonesia to meet the bears, the panda bears, the pigs, the tiger, the crocodiles, the wolves, the seals, the beavers, and the other animals (including walruses, penguins, robins, bluebirds, goldfinches, redpoll birds, sparrows, deer, bunny rabbits, raccoons, a skunk, squirrels, chipmunks, a flying squirrel, quails, a porcupine, ostriches, chimps, monkeys, and a sea snake), after Romeo and Juliet found their kids, they’re very disappointed in them when they were so worried about them, but they’re so glad they found them, but they better watch out for the orca whales, the lions, and the polar bear.

At the church,they all had to go to the shipwreck to capture Bucky, after he steals treasure from the shipwreck, but he escapes with the treasure, they all head back to the church to study that list that Bucky has, and went to the shipwreck cafe underneath the sea, after that, Mercutio, Benvolio, and Friar Lawrence are in the trap by Professor Baxter and his Thugs before they leave, but they’re been rescued by Olivine, Lilliana, Daniel, Romeo, Juliet, King Coltrane, with Queen Katherine, and all of the others. At the titanic ballet ship, the sea creatures who were all celebrating to see Princess Alicia who was on the stage, she introduces them to meet Professor Baxter who was now the lord, but they didn’t like him because they were all so shocked and afraid of him, as he is on the stage. Olivine, her family & friends, with the elephant seals, and the animals from Alaska, Asia, and Africa to go rescue Princess Alicia, and to arrest Professor Baxter and his gang, Olivine did save Princess Alicia, after Friar Lawrence was been stopped by a basking shark named Big Benny who was doing magic tricks on Friar Lawrence, but he was rescued by Kissy and her school. At the elephant seal beach, King Coltrane congratulates Olivine, her siblings, and her friends, for rescuing his daughter, and they all celebrate, after that, it’s time for Olivine, her parents Romeo and Juliet, her siblings Lilliana and Daniel, and her two pets to head home on the promise land, after they said good bye to her family and friends, especially King Coltrane and his family. 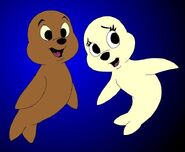 Retrieved from "https://ideas.fandom.com/wiki/Romeo_%26_Juliet:_Sealed_with_a_Kiss_2:_A_New_Generation?oldid=2154778"
Community content is available under CC-BY-SA unless otherwise noted.