Robotica 2100 is a cyberpunk video game series being develoeped by Nintendo EAD from 1998 til 2012, and Retro Studios since 2016, and is published by Nintendo, being released since July 3rd, 1998, being created by Yoshio Sakamoto.

Set in an cyberpunk city of Neo Robotica in the year 2100, a Famboo police officer and his beautiful Face Paint pal must save not only their city, but also the world at times from the hands of the evil.

The gameplay for the main series is the combination between platforming, puzzle and shooter. Every game also contains car chase levels, with the exception of Robotica: Age of Dinosaurs. (W.I.P)

See Robotica 2100: The Chronicles of Nelson and Alexis.

The original run lasted from 2002 til 2006, and the comics ended up getting revived, running since 2019. Both comics are being handled by IDW Publishing with license from Nintendo.

In 2019, Paramount Pictures (under Paramount Animation) expressed interest in doing a CG animated film adaptation of the game series, and Liam Neeson expressed interested in voicing Nelson. Later, it was confirmed with Gary Trousdale directing, aimed for its May TBDth, 2021 release date, with Neeson voicing Nelson, and Emilia Jones being confirmed to voice Alexis. It was confirmed that Johnny Depp would be getting a role of Nasty Ed.

Robotica 2100 received critical acclaim from critics. It is being considered as one of the beloved Nintendo franchises, following the footsteps of Mario, The Legend of Zelda, Metroid and Kirby.

Additionally, many fans consider TBD to be the best entry in the series. 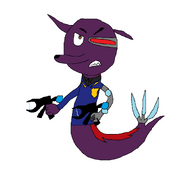 Nelson M. Fambooson.
Add a photo to this gallery

Retrieved from "https://ideas.fandom.com/wiki/Robotica_2100?oldid=2524385"
Community content is available under CC-BY-SA unless otherwise noted.