Rey is a fictional character in the Star Wars franchise and the main protagonist of the sequel film trilogy. She was created by Lawrence Kasdan, J.J. Abrams, and Michael Arndt for The Force Awakens (2015), the first installment of the trilogy, and is portrayed by Daisy Ridley. She appears in the sequels The Last Jedi (2017) and The Rise of Skywalker (2019).

In the films, Rey is a scavenger who was left behind on the planet Jakku when she was a child, and later becomes involved with the Resistance's conflict with the First Order. Powerful with the Force, Rey trains to be a Jedi under the tutelage of Luke Skywalker and General Leia, and faces adversaries such as Supreme Leader Snoke, Kylo Ren, and Emperor Palpatine; the latter is revealed to be her grandfather in The Rise of Skywalker. Rey later adopts the name "Skywalker" to honor her mentors and the family legacy. 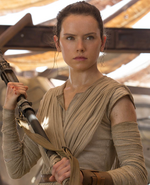 Rey with her own lightsaber 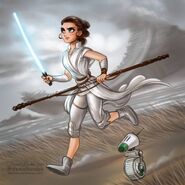 Concept of Rey Skywalker in her Jedi Master dress, as she appears in Marvel's Spider-Man: Webbed Champion