Regular Show: Across The Second Dimension is an video game based on Regular Show. It will feature Mordecai and Rigby travelling to another dimension where Benson doesn't exist, Gene becomes the new Park owner and Thomas is killed in action. It's up to Mordecai and Rigby to restore time in this strange dimension and team up with Skips, Hi Five Ghost, Muscle Man and Pops.

Regular Show: Across The Second Dimension is an action advenutre gamewhich is seen from third person perspective. There is multiplayer in the game to let another person controll Rigby. 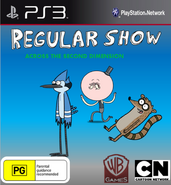 the game is only avaliable on the PS3 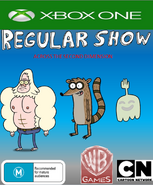 Warner Bros has announced an multiplayer online experience using characters from the game and you can also use DLC characters if you get the codes with the game.

It is just like Batman: Arkham Origins "Invisible Predator Online"  but you can use Regular Show characters.

There are four gangs in this mode. The Halloween Crew, a gang led by the Halloween Wizard. Susan Rules, a gang with Susan and her followers. The Rivals, led by Gene and The Magical Elements, who is led by Death. And The Park Strikers, has to be invisble predators to defeat all of the rivals they faced in their past.

Retrieved from "https://ideas.fandom.com/wiki/Regular_Show:_Across_The_Second_Dimension_(2014_Video_Game)?oldid=130761"
Community content is available under CC-BY-SA unless otherwise noted.