Raven (aka Rachel Roth) is a 15-year-old half-demon, half-human hybrid who is one of five founding members of the Teen Titans. She is voiced by Tara Strong.

Arella, Raven's mother, was chosen to become the bride of the demonic Trigon. Abandoned by the demon, Arella was bent on suicide (while carrying Raven) when she was taken in by the pacifistic disciples of Temple Azarath, a group who had centuries earlier forsaken life on Earth to pursue their own nonviolent lifestyle.

In their inter-dimensional world, Raven, Arella's daughter by Trigon, was born. Fearing that the child would bring evil among them, Juris, a magistrate of Azarath, attempted to cast the infant Raven into Limbo, only to be destroyed himself. Azar, the spiritual leader of the temple, then took the young Raven under her personal tutelage, instructing her in the truth of her parentage, and in pacifism, meditation, and the submergence of her emotions to resist Trigon's influence, while perfecting her powers of teleportation, astral projection, and empathic healing.

Later, after Azar's death (in which she entered another plane of existence), when Raven was plagued by prophetic dreams of Trigon and, defying her teachers, she confronted her demon father in Limbo at his bidding. Trigon spared her and Arella after satisfying himself that, upon his return when she reached adulthood, he could seduce Raven into becoming his ally. When Raven turned sixteen, she sensed Trigon's power returning and fled to Earth.

Raven arrived at Jump City, where she met several super-powered youths fighting a rampaging alien girl. Raven managed to discern the girl's true reason for her demolition work and convinced the others into a more peaceful approach, which won them the alien's friendship. Despite Raven's obvious insecurity, the others invited her to join them in defeating the truly hostile aliens the Gordanians, who had attempted to enslave the girl and her presence proved ultimately essential to the motley crew's triumph over the Gordanians. Afterwards, the group decided to stay together and formed the original Teen Titans.

Raven is one of the most mysterious characters throughout the series. She is quiet, emotionless, studious, and sarcastic. She can always come up with a witty remark, specifically in reply to most of Teen Titans' antics and attempts at humor. Her appearance and attitude appears to be that of a typical modern goth female.

In Teen Titans, Raven's appearance is seen as dark and mysterious throughout the series. Her superhero outfit is mostly made up of her favorite color, dark blue/indigo. She usually wears a blue cloak with a hood, with matching blue ruffled ankle-boots with black/gray soles, with a leotard-like long-sleeved shirt that is blue/black with cuffs at her wrists of the same blue of her cloak. On her cloak, she has a circular black/red jewel set in a gold plate that attaches the whole thing together; it covers her T-communicator and it's fixed to beep/glow when there is trouble as seen in some episodes. The jewel also sometimes has a raven head shape in the jewel. Around her waist she has a red and gold belt with the same jewels around it, while her legs are exposed. The belt ties at the back like a cord. Her hair and eyes are violet, and as seen in the episode "Birthmark", Raven cuts off the extra hair that she had grown. In "Switched", Raven despises Starfire's long hair, which may conclude why she likes to keep it short. She has a red and black bindi on her forehead, that she was born with. She has very pale, almost gray skin, which makes her appearance somewhat demonic.

In Teen Titans Go, Raven wears a blue/purplish cloak with a hood, behind it being a leotard-like suit with long sleeves reaching to her hands, though she is only seen without her cloak in which she meditates or uses her telekinetic powers. She has light gray skin, blackish-purple hair, purple eyes, and a red, diamond shaped gemstone on her ajna shakra on her forehead. She has skulls at the soles of her ankle boots.

In the Teen Titans Go! episode "I See You", Raven's true demonic form is revealed. In her true demonic form, she resembles her father. She has red skin, four yellow eyes, horns, and white hair. She uses a powerful spell to cleanse herself of darkness, transforming herself completely back to normal. Getting rid of her full true demonic form. Cleaning the darkness completely out of her also gave her a white cloak which means she's more powerful than before.

Raven was also friends with Annabelle in The Portal: Part 1 when Raven opens her Ancient Legends about the portal and Serana.

She is Raven's father. 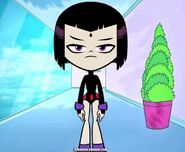 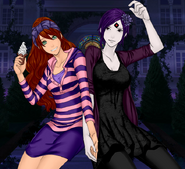 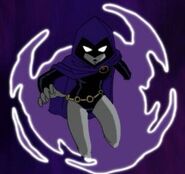 Retrieved from "https://ideas.fandom.com/wiki/Raven_(Teen_Titans)?oldid=2374823"
Community content is available under CC-BY-SA unless otherwise noted.