Start a Wiki
Not to be confused with the RCU or the RGCU (the other ROBLOX Game Cinematic Universe).

The ROBLOX Game Cinematic Universe (initially known as the RGCU) is a series of animated films, animated TV shows, video games, comic books and novels based off of various ROBLOX games.

A normal facility. A dangerous beast. A powerful hammer. After scientist Jack Morgan accidentally unleashes the Hammer of Justice's power across the facility, a beast attracted to the hammer's power willingly wanders into the facility, wreaking havoc left and right to try to find the hammer's location. The rest of the scientists, on the other hand, weren't expecting such an event to happen, so they have to hack the computers in time to fend themselves from any intruders (including the beast) now that the hammer was released as well as finding more about the Hammer of Justice and what organisms are attracted to it while also not trying to get attacked themselves.

The Watch and the Syndicate have been in war for a very long time, struggling due to their creative differences and opposing intentions. A Wonderer named Edgar is situated in the middle of a flame war between the head Watch officials and the head Syndicate officials and tries to escape the Neon District to avoid any more consequences. Meanwhile, a group of scientists create a peacekeeping droid named Contrast, which was intentionally created to help settle the creative differences between the Watch and the Syndicate, but instead of maintaining peace, Contrast intends to erase the population of the Neon District, starting with the Watch and the Syndicate. At first, everyone believes Contrast intends to do good, until it starts to recklessly damage property and kill innocent beings. Edgar believes this is just a rumor to help people keep their minds off of politics and the Watch-Syndicate war, but then realizes that this is a life or death situation. With the help of two other Wonderers named Sarah and Kai, Edgar attempts to take on Contrast to potentially end the war with the Watch and the Syndicate as well as rising the position of the Wonderers to a more globally recognized organization.

A superhero team known as the Mad Defenders do whatever it takes to protect the civilians from any potential threats, but when a man named John Alley (also known as Phantom) threatens to end the reign of the Mad Defenders due to him being unapproved for the team, the Mad Defenders have to recruit more and more people to try to stop his power from overcoming them. Meanwhile, a young teen named Andrew Phillips takes advantage of this opportunity and tries out to be the most powerful member that the Mad Defenders could ever have: Titan.

A man named Duncan Pine owns an artifact shop called Ancient History. He collects a bunch of extremely rare artifacts and sells them for ridiculous prices. He is rivaled, however, by another man named James Adams, who owns another artifact shop called Prehistorical, and his shop doesn't make as nearly as much money as Duncan. He always threatens Duncan that he'll take his artifacts, which are much rarer than Duncan's, but Duncan always finds a way to get past his little shenanigans and maintains the success of his shop. Meanwhile, Andrew Pine (the son of Duncan Pine) celebrates his seventh birthday, meaning he is officially old enough to start jumping off of the mountains. People in the mountains like to jump off of them to earn success as well as being a nifty way to donate blood. He is totally okay with jumping off of some of the smaller mountains, but then his older brothers (who like to jump off of the taller cliffs) start to trick Andrew into jumping off of the bigger mountains. After tricking him into going there, the bigger brothers push Andrew off of the cliff. Ten years later, Andrew is still struck with his phobia of jumping off of cliffs, and he's had to walk on crutches as a result. However, he is extremely smart and he develops different pieces of technology to help his dad find artifacts. Duncan tells Andrew to try to be more exciting and to do more stuff, while Andrew just shrugs him off and decides to stay in the shop because he likes helping his dad out. However, James Adams, overhearing their conversation, uses this as an opportunity to threaten Duncan. He tells him that if Andrew doesn't jump off of a cliff, he will not only kill them both (Andrew and Duncan), but also steal everything from the Ancient History shop. It is a life-or-death situation for Andrew.

After accidentally crashing his car, a man named Dan settles in a city called MeepCity where he accidentally comes face to face with a very famous pop star named Sabrina who actually works for a terrorist organization called the Counter Blox and uses her talented abilities to woo audiences over and to also distract them from politics. As soon as Dan finds out, it's his job to try to take down the Counter Blox before it threatens mass extinction.

After the events of Phantom Forces, we follow a man named Cooper who had just been arrested for robbing the bank, jewelry store and museum as well as having a huge bounty. He is taken to prison and tries to start a criminal gang with a simple plan: to break out of jail and to start committing crimes as a team. They have to get past the police and the Watch, however, and it won't be easy.

Plot kept under wraps. A sequel to Broken Bones.

Flee the Facility: The Hammer of Justice

Plot kept under wraps. A sequel to Flee the Facility.

Plot kept under wraps. A sequel to Phantom Forces and a crossover of all of the previous ROBLOX Game Cinematic Universe films.

Plot kept under wraps. A sequel to Jailbreak!.

Plot kept under wraps. The third entry in the Broken Bones series.

Plot kept under wraps. A midquel to Elemental Battlegrounds.

Plot kept under wraps. A prequel to the entire ROBLOX Game Cinematic Universe.

Phantom Forces: Those Who Remain

Plot kept under wraps. A sequel to The Streets.

Plot unknown. The fourth entry in the Broken Bones series.

All plans and films for Phase 4 of the ROBLOX Game Cinematic Universe are unknown.

This series will focus on several different characters in the ROBLOX multiverse going on adventures in different worlds.

Plot kept under wraps. An animated series based on the film Mad City.

Plot kept under wraps. An anime series based on the films Elemental Battlegrounds and Troublesome Battlegrounds.

An online virtual game centered around the RGCU where players can explore the many different worlds within the universe.

Issue #2: Eruption of the Multiverse

Issue #3: Revenge of the Beasts

Issue #7: Those Who Remain

Any information regarding the RGCU novel series is unknown. 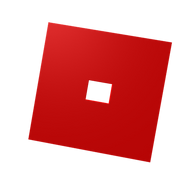 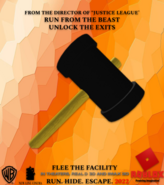 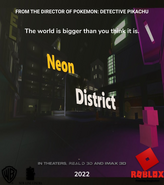 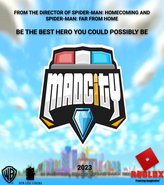 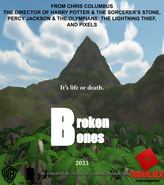 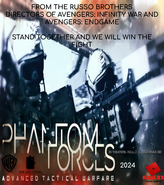 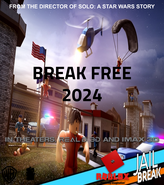 Theatrical release poster for Jailbreak!.
Add a photo to this gallery