A 14 year old named Haruto (Derek in the english version) must fight the Goodlesses along with Brian and Buster to save the worlds and dimensions of PBS Kids and his sister Rouge before it's too late.

Derek, Brain, and Buster
Add a photo to this gallery 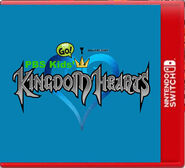 Retrieved from "https://ideas.fandom.com/wiki/PBS_Kids%27_Kingdom_Hearts?oldid=2692370"
Community content is available under CC-BY-SA unless otherwise noted.