Optimus Prime, known in Japan as Convoy (コンボイ, Konboi), is a fictional character created by the Transformers franchise. He is a Cybertronian, a fictional extraterrestrial species of sentient self-configuring modular robotic lifeforms (e.g.: cars and other objects), a synergistic blend of biological evolution and technological engineering. In almost every version of the mythos, Optimus is the leader of the Autobots, a faction of Transformers who are rivals of the Decepticons, another faction. He is defined by his strong moral character, and is almost always portrayed as the primary hero of the story, opposing the evil Decepticon leader Megatron.

Over the history of the Transformers franchise, Optimus has been portrayed by a variety of actors, such as Peter Cullen, Garry Chalk, Neil Kaplan, David Kaye and Jake Tillman. He is considered an icon of popular culture and has been featured in countless forms of media.

He also appears in several Idea Wiki media, including House of Animals and The Legend of Epicness.

The Legend of Epicness

The Funtastic World of House of Animals

Transformers: Bots Alliance of Save American (2020)

Marvel's Transformers: Assemble and Roll Out

Optimus is among the featured crossover heroes in Marvel's Spider-Man: Webbed Champion, voiced again by Peter Cullen. Appearing in the crossover arc "Legendary Universes", he and his fellow Autobots (along with the Dinobots and their human allies) first appear in "Part 4: Heroes in Disguise", where they team up with Spider-Man and his team of Champions to defeat Predaking, who was resurrected by crystals powered by Kree technology which was salvaged and discarded by Oscorp's engineers weeks ago and now seeks to convert human technology to his own liking and take revenge on the Decepticons for attempting to enslave him. During the mission, Optimus primarily partners with Spider-Man himself while each of his fellow Autobots picks a partner with each of Spider-Man's teammates. Optimus and the Autobots later appear in "Part 6: Ultimate Alliance", where they join the Avengers and Champions on the battle against the Regent and his army from the Negative Zone. 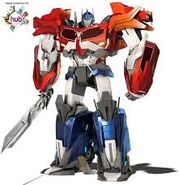 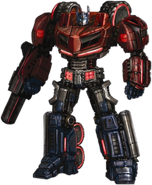 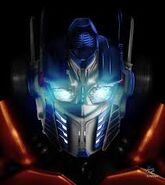 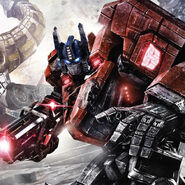 Add a photo to this gallery
Retrieved from "https://ideas.fandom.com/wiki/Optimus_Prime?oldid=2709164"
Community content is available under CC-BY-SA unless otherwise noted.