She has played a recurring character, Jill Tracy, on Scrubs and voiced the villainous Shego in Disney's Kim Possible. She had recurring voice roles on Family Guy and voiced "Franny Robinson" in Disney's Meet the Robinsons. From 2008 to 2009, Sullivan starred in and was the lead of her own Lifetime television series Rita Rocks. Currently, she voices Marlene in the series The Penguins of Madagascar. Sullivan also currently appears as Jules' (Courteney Cox) therapist, Lynn Mettler, on the comedy Cougar Town. Recently, she portrayed Lyla in the Disney channel original movie Let It Shine. In 2013, she starred in the short-lived Nickelodeon sitcom Wendell and Vinnie as Wilma Basset. 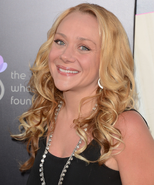 Add a photo to this gallery
Retrieved from "https://ideas.fandom.com/wiki/Nicole_Sullivan?oldid=2057771"
Community content is available under CC-BY-SA unless otherwise noted.