Rigby's rudeness, not cleaning up

Mordecai is one of the two main protagonists of Regular Show, along with his best friend Rigby. He made his debut in the non-canon short, "2 in the AM PM", as a human cashier, who then morphs into a prototype Mordecai-like character with a fanny pack. He later makes his first official appearance in the Pilot episode. Mordecai is voiced by the show's creator, J.G. Quintel.

After the dramatic ending with Pops' defeat over Anti-Pops, in which he sacrifices himself to save the universe, Mordecai and Rigby finally part ways, with Mordecai becoming an abstract artist and marries a bat-like girl he meets at a gallery (Stef), and they have 3 children (2 sons and a daughter).

Mordecai is a 6'3" tall anthropomorphic blue jay. He was 23 when the series began. The upper portion of his head, wings, tail feathers, and back are mostly blue, while the lower portion of his head and chest are white (and a few times pale-blue) with a faint, blue line down the length of his chest. A thick, black stripe circles the sides of Mordecai's head, ending near his face. His dark gray nose is found on his grey beak between his two eyes. Two white lines are found on both of his wings with two thinner, black lines on each of his fingers and three tail feathers. Mordecai's legs are grey with black stripes across the width and two toes. Like most blue jays, he has curved, crested blue feathers, or "hair", on his head.

When he was five or six years old, he used to have buck teeth, and didn't have the black stripes on his tail feathers or fingers. When he was in his pre-teens and teenage years, he used to have brown hair and braces. In his possible late teens, Mordecai's brown hair was long and at one point covered his eyes. 25 years in the future, at the 25 year park reunion, Mordecai (now 48) is shown a little heavier, with a brown beard and thick black glasses, and he is wearing a red hoodie over a light grey shirt and a purple beanie. He also has a gold wedding ring.

In House Rules, in the no rules land there is an old version of Mordecai. He is fat and bald and has a white beard and hair under the black marks on his head. He touches the present Mordecai's hair and tells him he'll miss that, and that he'll also miss Rigby. When Rigby questioned this, the old Mordecai dismisses it. He is eventually run over by the unicorns' car while they are chasing the present Mordecai and Rigby.

In Just Friends, during the future vision shown by the smoke from the onions that showed Mordecai and Margaret's possible future together, an elderly Mordecai is seen. His appearance is similar to his appearance at the end of the finale; His hair and body are the same and he has a beard and glasses. He is wearing a collared shirt and long pants.

Mordecai is mild-mannered and laid back. Like Rigby, he lacks clothing, plays video games, sings karaoke, and drinks copious amounts of coffee and soda. Of the duo of two main characters, Mordecai displays far more patience, responsibility, and intelligence than Rigby does. Although almost every problem caused by the duo is Rigby's fault, Mordecai does cause problems at times, though they are unrelated to work. An example is in "The Unicorns Have Got to Go" when Mordecai tries to attract Margaret with DudeTime, but ends up attracting a group of ill-mannered, lazy, and irresponsible unicorns that wreak havoc. Mordecai puts up with Rigby's laziness and immaturity, once even filling out a job application for Rigby because he claimed it was "boring." Mordecai tends to be more sociable, friendly and serious than Rigby, and has much more manageable relationships with others. Although Mordecai naturally despises work, he strives to keep a good reputation, once almost losing his life to avoid being labeled as a slacker, and vouching for extra work to pay for concert tickets. Unlike Rigby, Mordecai doesn't talk about or openly express himself or his feelings. Therefore, Mordecai's most obvious shortcoming is his inability to engage his love interests by speaking his heart. Whenever he was around his crush, Margaret, he would often stutter or lose focus. In spite of this, he often made up excuses to go to The Coffee Shop just to see her. He is a serious person and wants people to do the right thing. It is also proven that he is fond of the word "dude" and the saying "Oooooooh!," as he and Rigby often exclaim, although they do stop saying this when they get older as seen in the finale. 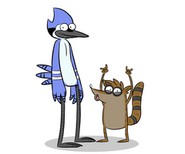 Add a photo to this gallery
Retrieved from "https://ideas.fandom.com/wiki/Mordecai?oldid=1197014"
Community content is available under CC-BY-SA unless otherwise noted.