Start a Wiki
Misty (Kasumi in Japanese) is a character whose first appearance was in the very first episode of the anime series, Pokémon - I Choose You!. In this episode, she first meets Ash after fishing him out of the water when he was trying to get away from a flock of Spearow. Ash then takes Misty's bike from her in order to escape the Spearow, which is then wrecked by Pikachu's Thunder Shock. Misty then tracks down Ash and follows him around on his adventures until he can pay her back, although she eventually forgets about the bike and becomes one of Ash's closest friends in the process.

Misty has orange hair, tied in a ponytail. She has green eyes and white skin. She wears red suspenders, a yellow tank top, blue denim shorts and red and yellow sneakers. Her whole midriff is showing, but her belly button is not usually drawn on.

Misty has a slight inferiority complex, mostly due to her three older sisters Daisy (oldest), Violet (second-from-oldest) and Lily (third-from-oldest), who formed the group, "The Three Sensational Sisters" (their synchronized swimming group), and refer to Misty as the "runt" or "weaker one". This complex diminishes over time as Misty grows closer to them. Until Misty resumed her duties as the Cerulean City Gym Leader, her sisters were the ones who directly ran the gym, although when Ash came along to get his Cascade Badge, it was Misty who battled him for it, explicitly referring to herself as being one of the Sensational Sisters during this instance.

Even if Misty's sisters can be kind of mean to her, they really do care about her - they just aren't very good at showing it sometimes.

Misty specializes mainly in Water-type Pokémon, which are her favorite type, but she's had other types, and she also deeply admires Lorelei, an Ice-type Pokémon trainer. Misty aims to become a world-class trainer, and her well-trained Pokémon reflect her aspirations of becoming so. Her least favorite type of Pokémon are Bug-type Pokémon, as she has a deep-rooted fear of them (except for the kinds she sees as "cute" or "pretty"). However, Misty's fear lessens over the course of the series - but not to the point where she's totally gotten over it, as shown in A Real Cleffa Hanger.

As the series continues, she gradually shows herself to be kind and sensible. Sometimes she would restrain Brock from girls, often pulling him away by the ear. This trait continued with the friends who join Ash on his journeys after she parted ways with him. 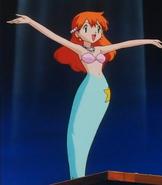 Misty as a mermaid

Misty in her green bikini

Misty in her yellow bikini

Misty in her red bikini

Artwork from the original series 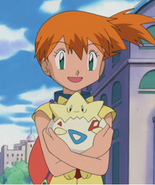 Add a photo to this gallery
Retrieved from "https://ideas.fandom.com/wiki/Misty_(Pokemon)?oldid=1713904"
Community content is available under CC-BY-SA unless otherwise noted.