Max is also a founder member and second in command of a team of young heroes called the Planet Warriors.

Max is an average boy who enjoys science and has an interest in kaiju. When Max was first got his powers, he was afraid that people would see him as a monster and he'd be endangering his family. However, he has gotten over his fear and decides to use his abilities to save innocent lives. Even though he's a public hero, Max never puts fame and fortune over his family and friends. Max is truly loyal to his friends and family as he would never let anyone talk trash about them or blame either one of them for any of his mistake. Max also possesses a sense of honor. 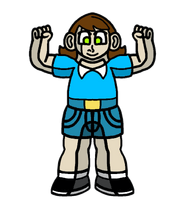 Max, along with Dennis and Andrew were born in Diamond City to Mary Stewart and Dr. Harold Stewart. At the age of 5, Max was played as a swordfish character on an old kids show called Happy Fish Pals.

The Origin of Monster Kid

Mary is Max's mother and has raised him to be a good child. She was always been overprotected of Max since the day he was exposed by the G-Energy Compound.

Max sometimes likes to annoy his older sister, but still cares for her.

Max and Daisy always shared a special bond and care for each other. Whenever Daisy gets kidnapped by any villain, he gets serious and goes to rescue his younger sister.

Zoey is a childhood friend of Max and his love interest. In Master of Monsters and Evolution, he began to develops feelings for each other. In Return of Monster Kid, they get married.

Zero is Max's archenemy and hates the young boy for interfering with his plans to conquer the Earth and the entire universe. After seeing how Zero poses as a threat, Max has vowed to defeat him and stop his plans for galactic conquest.

Retrieved from "https://ideas.fandom.com/wiki/Max_%22Zachary%22_Stewart?oldid=2716344"
Community content is available under CC-BY-SA unless otherwise noted.