Maruko is an 2017 comedy family children's TV series that is an English dubbed version of the 1995 Chibi Maruko-chan anime series originally aired on Fuji Television. It will be made by Bang Zoom! Entertainment for Bandai Entertainment. It was released September 4th, 2017. It will also be released on streaming services that streams anime. DVDs will be released November 6th, 2017 by 20th Century Fox Home Entertainment and Bandai. 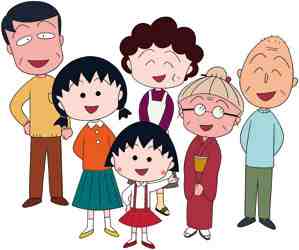 The title character, Maruko (born May 8, 1965), is a nine-year-old third-grade student raised in a relatively poor family of six. It is implied that the show is drawn by Maruko herself.

Maruko's father. He was introduced to Maruko's mother by her friend. His birthday is June 20, 1934, making him 40 years old during the series.

Maruko's mother. Her birthdate is May 25, 1934. It is revealed in one episode that her maiden name is Kobayashi.

Maruko's kind but absent-minded grandfather. His birthday is October 3, 1898, making him 76 in the series. The author has said that she used her own grandfather as the model for Tomozou, but that his personality is the opposite of Tomozou's.

Maruko's grandmother. She's wise and knows what's good for the human body and wears a traditional Kimono. She was born on April 4, 1904. Her name of Kotake was never known in the series until it appeared in a 4-panel manga (Yonkoma) on July 1, 2007.

Maruko's best friend. She is intelligent and she does not include herself in other activities with Maruko. Nicknamed Tama-chan. She also has a father whose favorite hobby is photography.

A rich boy in Maruko's class who lives in a mansion. His mom is always away travelling and so he doesn't see her that often. He's multilingual who sometimes speaking phrases and words in English and French along with his native Japanese and also has a butler, Mr. Hideji, who drives a limo and picks him up every day from school. Hanawa is mentioned to have a crush on Maruko. He was born on August 7, 1965.

Maruo is one of Maruko's classmates and serves as the male class president and always wants to be admired by others. He has very thick glasses because he is a very serious student and studies very hard every day; black lines appear on his face nearly all of the time, especially when he seems euphoric. He is paranoid that his classmates are seeking to replace him as male class president and will target classmates that stand out and do well to discourage them from running against him. His birthday is December 31, thus giving rise to his name.

He laughs non-stop about anything good or bad. He is also known as the "classroom idiot boy" (クラスのバカ男子) or "Class Clown".

A very weird, and creepy girl who always jokes usually on the macabre side. She also likes to make fun of others, especially Maruko. She often spies on people. It was revealed in one episode that she's the daughter of theatrical stage performers Shosuke and Fujio.

Original logo, but was scrapped.
Add a photo to this gallery
Retrieved from "https://ideas.fandom.com/wiki/Maruko_(2017_English-dubbed_anime_of_Chibi_Maruko-chan)?oldid=1452317"
Community content is available under CC-BY-SA unless otherwise noted.