Marth (Japanese: マルス, Hepburn: Marusu) is a fictional character from the Fire Emblem series, developed by Intelligent Systems and owned by Nintendo. Being one of the Main Protagonists from the aforementioned Fire Emblem series, he would be a Playable Guest Character for the Nintendo Switch version of the game.

The reference is taken from this: [1]

L– Spins around with sword outwards (hits a few times)

Shield Breaker: Marth will bring his sword back before doing a quick pierce forward. By itself it does a small amount of hit stun therefore can be followed up with a combo but the player can hold down the attack button to charge up power before letting go to have Marth strike. If the player lets go half way the attack comes out faster and causes a hard knockdown instead. But a fully charged pierce causes a ground bounce but this movie has a special property against blocking opponents. If a fully charged pierce is used on a blocking opponent not only will this attack actually damage the opponent greatly but it also ends in a crumple state instead making this a deadly attack.

Rushing Pierce: Marth will suddenly rush towards the opponent before going to pierce his sword forwards.

The Light version has him rush straight forward, Medium is the same but causes more hit stun and the Heavy version has him actually leap upwards at an angle to catch air borne enemies.

The air version of this attack can even be followed-up with Diving Pierce, Air Pierce or any normal to do an air combo.

Also if Marth uses a Light or Medium version of this attack on an airborne opponent it will cause a wall bounce.

Seal Shot: Marth will pierce his sword at the ground which causes a seal of light to burst out from the ground in front of him, a close ranged attack that doesn’t do much damage but it’s a good combo extender as it hits off the ground.

One Hundred Slashes: Marth utters “I have to do this!” as he then suddenly at a very fast speed appears in many places at once slashing his sword at the opponent, doing multiple hits and damage which can be increased via button mashing.

Counter: Marth will go into a parry stance, if the opponent physically attacks him while he is like this he’ll counter attack by quickly piercing his sword forwards which causes a crumple state.

Critical Hit: Marth will say “Time to end this now!” as he then rushes at the opponent with a pierce, if he connects a cutscene will occur.

The opponent will be knocked back as suddenly a Fire Emblem styled health bar appears above their heads when they get up all dizzy. Marth then raises his sword into the air saying “I can’t hold back now!” as he then rushes forward and then does a strong slash outwards that shows the opponent's “health bar” getting depleted to zero which does instant heavy damage and sends the opponent flying thus ending the Critical Edge.

The Coliseum, in which is the name referred to the Arenas from his home series, serves as his Stage. It's appearances in the Super Smash Bros. games is used, albeit with alterations and differences such as the elements that are unique to it are removed in order to fit well with how the stages in the Soul Calibur series look like. 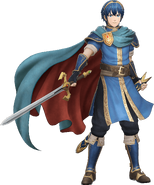 Retrieved from "https://ideas.fandom.com/wiki/Marth_(Soul_Calibur_VI_Guest)?oldid=2392286"
Community content is available under CC-BY-SA unless otherwise noted.