Marco Diaz is the deuteragonist of Star vs. the Forces of Evil. He is voiced by Adam McArthur in English (most of his appearances, save for the Video Game parts where he is voiced by Bryce Papenbrook) whereas Kayuzuki Okitsu voices him in the Japanese counterpart.

Marco is kind, responsible, very organized and supportive of others. He has a reputation at his school for being the "safe kid" due to avoiding danger and being cautious, though he insists that he is a "misunderstood bad boy". He prefers keeping his possessions neatly organized so he is smart, getting good grades in his math and psychology classes then figures out how to find a replacement for Star's wand charger using the metric system. Because he likes it when things go his way, he can become unstable when they don't, like when he snaps at Star for ruining his room and insanely trying to live in front of Stop & Slurp. Although he is not used to the kind of craziness that Star brings, he admits that he would like a little danger in his life and finds fun in fighting monsters with karate.

He often struggles with self-confidence, afraid of being ridiculed by others, and can become nervous easily. He has an occasional temper and can get frustrated and/or annoyed with others, such as with Star when she intrudes upon his life, or recklessly drags him into overly dangerous situations. However, he soon makes amends with those who cause him grief, like thanking Pony Head for saving him in "Party With a Pony". He cares deeply for those he is close to, attempting to save Ferguson from being kidnapped in "School Spirit" and trying to cheer up Star whenever she is feeling upset. Marco also has an urge to protect and save Star occasionally, as depicted in "Sleep Spells" and "Blood Moon Ball".

Marco is at a medium height with a slender build, tan skin, dark brown hair, brown eyes, and a mole on his right cheek.

From the untitled SVTFOE based Metroidvania game

Marco's outfit in the sequel series Star and Mewni Creek. 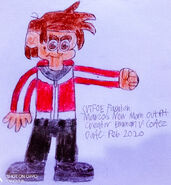 thumb|Marco's Outfit for Starlaxite: Omnivespell Maxtreme
Add a photo to this gallery
Retrieved from "https://ideas.fandom.com/wiki/Marco_Diaz?oldid=2426597"
Community content is available under CC-BY-SA unless otherwise noted.